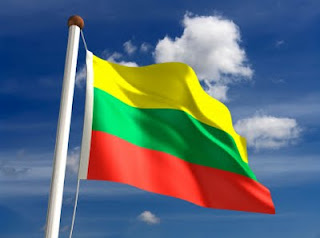 The warning Nate got about his inlaws turned out to be fair--they were indeed up partying all night. However, no Eastern European--not even a Ruski--has anything on Stauber. When I came down from the bunk room the next morning, I found him asleep on the table where we had been eating dinner the previous night. Apparently, he had just "gone to bed."

While Stauber slumbered in the dining room, the rest of us hung out on the grounds of the lodge where there was a sauna, a lake, a swing, and various other lounging aids. After a while, I noticed that a group of people had gathered near the picnic tables and made my way over. There, was Lina's grandmother, who was addressing the small crowd as Mendogas and Lina translated.

It turned out that she was talking about her experience as a Lithuanian who was deported to Siberia in the early 1940s. Along with 12,000 other "enemies of the people," she had been arrested and moved to a Soviet work camp. Together, she and Lina's dad explained what it was like to be a Lithuanian before, during and after the Soviet occupation from 1939-1990.

While they tried to make their accounts as educational as possible, it was clear there was a lot of emotion behind their stories. Living under Soviet occupation had been financially devastating as well as demoralizing for most Lithuanians. As I listened to Lina's family members tell their stories, I got my first glimpse into this country's fierce sense of national pride.
Posted by LJP at 10/13/2010