When You Were Little... 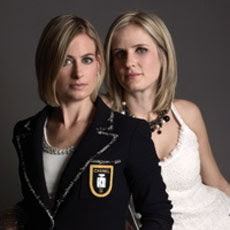 Now that a lot of my friends are having kids, I’ve been thinking more about those early predictors of adult personality. It’s provided us endless entertainment to guess which of their idiosyncratic baby traits might be indicative of things to come. For the past year or so, Heb and I have wondered if her little boy (new pics just in!) might grow up to own the clubbing scene based on his undeniably fly dance moves. Or if maybe he’ll be a music critic, we’ve considered, since he really does have discriminating tastes. Right now he’s in a retro phase where he’s all about shakin’ it to Elvis. Well, if either happens, don’t say we didn’t see it coming.

When I look back at myself and some of my friends, there’s no denying that our childhood selves provided some big clues as to who we’d become. My friend Gwen is a perfect example. I met her in gymnastics class when we were 5 and was immediately drawn to her crafty ideas—not to mention her true appreciation of my weekly innovations in mischief.

By age 8, Gwen had learned to sew and knit from her mother and was “designing” fabulous outfits in her Trapper Keeper notebooks. By age 14, she had opened her own necktie business, adorably called “All Tied Up” which she launched just in time to cater to the private school boys who, now that we were in high school, would be forced to wear ties every day. A designer, entrepreneur and savvy little marketer before she hit puberty, it was clear that this girl was going places.

One of our childhood pursuits that Gwen and I laugh about today is the informercial that we concepted, wrote and "produced" when we were about 11. The idea stemmed from the fact that a mother of one of the girls on our gymnastics team wore black pants—every single day—
because she found them to be “slimming.” For some reason (likely the onset of our pre-teen bitchy phase), we found this to be staggeringly hilarious and began devising a response in the form of a pretend new product: a pair of black pants that came with various accessories to disguise the fact that one was always wearing the same thing.

Soon after dedicating ourselves to this creative endeavour, Gwen slept over one night and we skipped the usual 11-year-old-girl stuff (you know, crank calling boys and watching and rewatching Adventures in Babysitting) in favor of working on our “Black Pants” project. We locked ourselves in my pink and green bedroom for hours while she designed, among other clever accessories, removable Velcro pockets that came in all different materials and patterns. Meanwhile, I wrote the script, named the accessory variations and art directed the “production,” which I think we performed for a reluctant audience consisting of my mother…who probably just wanted to watch Dallas and be left alone at that point in the evening.

Years later, I came upon the script along with Gwen’s designs while cleaning out a bedroom closet. Aside from the fact that my spelling was atrocious (even more so than today), our Black Pants product and infomercial was basically awesome. And when I read the script to her over the phone more than a decade later, we again found it to be staggeringly hilarious. (View part of our original script and be sure to note my spelling. I'm particularly shamed by "pare of pants.")

So you must be wondering how Gwen turned out. Wouldn’t it be funny if I went on to explain how she had become an astronomer or a database programmer…or an expert in preserving the native languages of South America? Well, she didn’t. Gwen went on to study Apparel Design and Management at Cornell. And since then, she‘s become a recognized entrepreneur, "changing the way America does laundry" when she launched The Laundress, an “eco-chic line of specialty detergent and fabric care.” Together she and her business partner, Lindsey, jet set all over the world, spreading the gospel on fabric care: You need never dry clean again! And the good people yell amen! (See above pic, Gwen on the left, and another cute one here.)
And me? Well, I’m busy writing scripts, naming products and working with art directors, of course. And when I’m not doing that, I’m pretty much exploring innovations in mischief. Occasionally, I get a call from Gwen who wants some help fleshing out another one of her crafty ideas, which I’m always thrilled to do. After all, I’m still really drawn to them.
Who knows? Perhaps one day Heb's son will have some downtime between prestigious dancing engagements and he'll go on tour with Gwen and her fabulous Laundress crew, working as a dancer in one of their informercials. And we will have seen it coming.
Gwen with her laundry, as a youngster 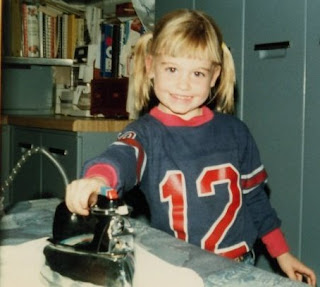 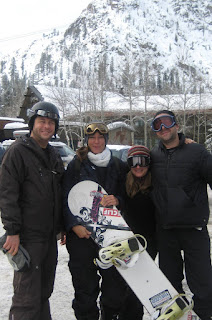