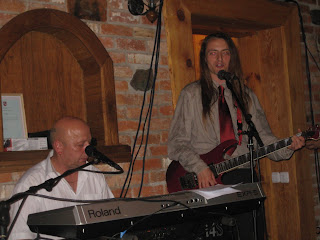 As the evening went on, it became evident that the singer of the band spoke perfect English and knew quite a few English-language songs. Cousin Sam, a passionate musician, managed to convince the band to take a break from Lithuanian music and play a song or two in English. He even volunteered to pick up a guitar and play along.

Before anyone knew what was happening, the band was rocking to AC/DC and Sam was basically head banging. One minute people were dancing to Hava Nagila-style wedding music, and the next, well, um, Who Made Who was blasting from the small stage. After a few songs, the band switched back and Nate's mother and uncle let out a big breath. Man, do I love weddings. I also really like Cousin Sam.
Posted by LJP at 10/12/2010