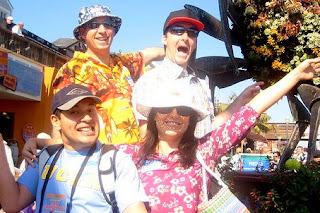 I still love you--I swear. I’ve had a whirlwind of a time as of late and, before I knew it, 6 months had passed. Are you mad?

Let me do my best to catch you up:

I had a tourist-themed birthday where all my pals dressed up like SF tourists and rode around on double decker sightseeing buses all day (see above pic). From fanny packs to Hawaiian print visors to an abusive consumption of our local Anchor Steam offering, it was everything you’d dream for a Friscotastic experience.

I learned how to Double Dutch!

Heather D. got engaged! This is exciting for many reasons, not least of which is getting to write and deliver the bachelorette roast speech that I have been planning for since the Great Mystery-Puke Caper of 1992. And that’s all I’ll say.

I visited Heb, James and the baby again in the O.C. Good God, this child is prescious, although his taste in music remains questionable as the ONLY song that keeps the little guy calm while confined to his car seat is Bing Crosby's "Chesnuts Roasting on an Open Fire." It's true. I learned this one morning while we were all driving to LA to have brunch at Heb's brother's new restaurant and she played the song a few times in a row. At first I thought she and James were just playin' things safe to avoid any remote chance of a mid-highway meltdown but learned not to doubt them the second the next song came on (by mistake) and screaming immediately ensued. So guess what we listened to the entire 1-hour drive...on repeat? Yep. "And sooooo I'm offering this simple phrase:" do not question sleep deprived parents.

My company closed down. Well, not MY company, but the one I had been working at for the past 2 years. True story: we came into the office one Thursday and were told to huddle up in the conference room. The unfortunate news of mass demise was delivered, orange juice and vodka were set up in the kitchen (in lieu of severance) and packing boxes were made available to facilitate an organized group exit. Next thing I knew, my coworker Ashley and I were drinking gin fizzes at Citizen Cake at high noon, earnestly calculating whether or not our EDD checks would cover biweekly pedicures. Post script: Um, they don’t.

Note: one thing that's kind of funny about this situation is that, not 2 months prior, we had a Depression Era themed holiday party where we gambled for "buttamilk." Hubris? I think...yes.

I became a de facto expert on city of Balt’mo. My new unemployed status afforded me ample opportunity to watch all five seasons of The Wire. Back to back. With great attention to detail…often involving in-depth wikipedia study and cross reference following a particularly rich episode. So if you have any questions about my peeps (you know, Omar, Brother Mouzone, Snoop, Bodie), hit me up with a clock face SMS and I’ll know just where to meet you.

I learned I have the same blood pressure as Lance Armstrong. Which is apparently so low that it's noteworthy. Not sure what to make of this other than I’m pretty much poised for athletic domination, hopefully in the double dutch arena.

And there you have it.