Has Anyone Seen Stauber? 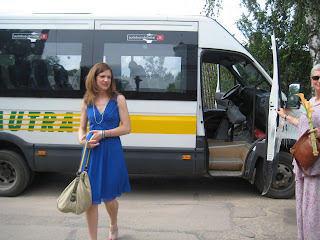 The next day we were scheduled to travel by van to Alytus (pronounced “Al-ee-tas”), the home town of Lina and Mendogas. However, there was a bit of drama getting out of Vilnius on time. You see our especially fun friend Dave Stauber, had arrived the night before. Wired from his flight, he convinced 20-year-old Cousin Sam and me to join him for some late night shenanigans post dinner. Let’s just say that Cousin Sam, an endearing little thing with a heavy British accent, was no match for the blinding force behind Stauber’s party power.

The next morning, poor Sam arrived at the van, in a bad way. Hungover and exhausted, he had somehow managed to spend all the funds allotted for his trip, which still had 4 days remaining. Meanwhile, Stauber was nowhere to be found. While I attempted to track him down, Sam begged his cousins to buy him some bottled water. ("A bit of water would be luvely, if it's not a bothah.") Eventually, we all made it on the van, with a frazzled, sheepish Stauber haphazardly stuffing clothes into his bag. Mendogas sat up front with the driver, no doubt apologizing for his cross to bare: Team Americanas.

This scenario immediately brought me back to the era of high school field trips. In fact, it was Nate and I, along with our friend Verd and some other delinquents, who caused a similar holdup on the Chatham High School trip to DC, back in ‘92. Convinced it was a good idea to indulge in a bottle of Southern Comfort (we were in the South, right?), a group of us wound up drinking ourselves sick at the hotel after a day of sightseeing.* Verd, now a Harvard educated attorney who appears on CNN as an expert commentator, attempted to explain his delayed bus arrival and disheveled appearance to our teacher, Dr. Freiberger, with an excuse he’ll never live down: “I ate some bad fish.”


*Let it be noted that Nate was an innocent bystander in this operation.
Posted by LJP at 10/07/2010