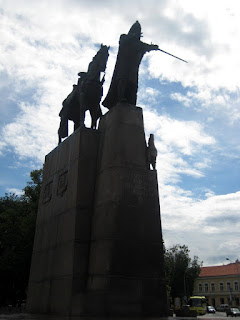 Since Lina was still at her father’s house, preparing for the wedding pre-party, she had arranged for her brother Mendogas to show “The Americanas” around Vilnius. At this point, we had become quite a large group as Nate’s mom and her husband had joined us, along with Nate’s aunt and uncle, their two daughters, and a stray cousin from England by the name of Sam.

At last we encountered "baby brother" Mendogas, the tallest person I’ve ever met. A city historian and proud resident, we couldn’t have been in better, or larger, hands. As he aptly explained the historical significance and artistic value of each point of interest, he trotted us all around Old Town—up to the castle, around the main square, past what I deemed the Lithuanian Darth Vader statue (see photo), and through the ancient city gates. I guessed that we looked like bunch of little ducklings following their large, Lithuanian mother.

As my jetlag set in, the group walking tour started to feel like some sort of tourism endurance test, and I didn't care if my failure made my countrymen seem apathetic and lazy (plus, we kind of are). “Mendogas?” I asked with trepidation, looking way up at him to meet his eyes. “Um, would it be ok if I went back to the hotel for a bit before dinner?” “Yes,” he responded flatly with zero facial expression, indeed a man of few words. So back went the little Americanas with her figurative hall pass, to lay around…and sweat.
Posted by LJP at 10/07/2010