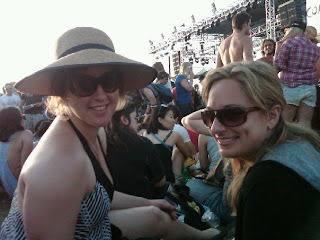 Fourth Stop: Coachella Music Festival
Post-desert expedition, we hosed off a bit before heading to the festival. I even put on a pair of wedge heels (flash forward: reeeally bad idea). What happened next involves a few logistical fails that no one really wants to remember, including me: crazy gridlock, stand-still entry lines and utter cell phone melt down—all while basking in the hot SoCal sun.

Transcendence
Successfully transcending the chaos, we eventually made it to our first set of shows*. And thanks to Jen, we would still be able to find one another despite modern technology failure, for we had Friend Locating Devices (FLDs). Note to self for next year: sitting on a pretty blanket listening to incredible bands from around the globe with the sun shining above and the Coachella mountains in the backdrop is well worth all the logistical negotiations necessary to make this moment happen. Amen. (below pic from LA Times) 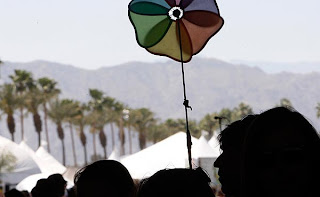 Sleep Away Camp—For Hipsters
Reflecting on our next 3 days at the festival, I’ve come to think of the experience as something akin to Hipster Sleep Away Camp. Not only did Coachella participants all sport camp uniforms (consisting of stylie festival-wear and the requisite assortment of plastic ID bracelets), but we all found ourselves in that childhood zone of unadulterated freedom.
It’s true. For 3 days, everyone’s schedule is pretty much dictated by nothing other than fun-filled extracurricular activities (i.e. music appreciation, lunchtime, social hour). Days were spent palling around with various friends (old and new) whom you saw in all possible states—party mode, play time, rest time. Just like at camp! I swear if people had broken into a game of Red Rover, it would not have surprised me in the least.
What really solidified the camp analogy for me was the relationship that Jen and I forged with a group of Canadian boys who had traveled to Coachella as part of a 14-man bachelor party (or a “stag party” as they call it up North). On the first night of the festival, we introduced a few of them to the FLD concept as the Vampire Weekend show was rapping up. This undoubtedly high-brow conversation (ummm?) led to teaming up with some additional members of their crew for the Jay Z/Beyonce show, which, in turn, led to additional palling around. (check out the below LA Times pic to see what if feels like to be there at night.) 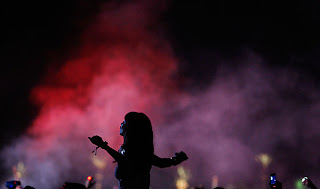 Never Have I Ever
The more we saw of these boys over the next few days, the more intense became my nostalgia. Vivid memories from long summers spent at sleep away camp and visiting the former Miss Donahue at her New England summer home flooded my mind. Those fabulously teen-angstie times were without a doubt defined by getting to know boys from other parts of the country and continually reconnecting with them in what felt like a magical haze. There was something about those experiences that seemed fateful, and they clearly made a lasting impression.
Since those teenage summers, I’ve had all sorts of life experiences, yet I can name only a handful of situations where I’ve felt so close to those memories. Yet here was that feeling again. Maybe it was because Jen and I were ostensibly “sneaking out” of our camp site to stay up til dawn with our neighbors from the North. Or perhaps it had something to do with a throwback to the days of setting up a meeting place and a secret communication code (the FDL). Or, it could have been related to the fact that we were really taken with these guys. Pretty much all 14 of them. Yeah, maybe that was it.
And how could we not be? Not only were they notably polite, cute (see below!), accomplished and clever, but their group consisted of an Olympic bobsledder, a semi-professional Rugby player, a for realz economist and a body builder who also happened to be a gymnast and son of a Canadian folk artist**. We just couldn’t get over how darling they were, shepherding us through the crowds; tending to us at their bachelor pad (“Would you like me to make you a smoothie? Set you up on the lawn chair? Direct you to the washroom?”); and asking us all about our lives in SF. 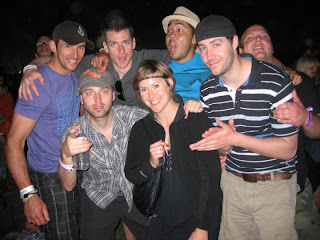 Pen Pals 2.0
When it came time to part ways, it felt like that last night at camp when you trade addresses and heartfelt farewells around the campfire. Although I may not send hand-written letters on unicorn stationary like I once did, I’ll certainly keep up with these boys on the Interweb. After all, the union did feel sort of fateful.
----------------
*Friday: She & Him, Passion Pit, Grizzly Bear, LCD Soundsystem, Vampire Weekend and the one and only Jay Z; Saturday: XX, HOt Chip, MGMT, Muse, Flying Lotus, Tiesto, 2ManyDJs; Sunday: Mayer Hawthorne, Matt & Kim, Spoon, Phoenix, Orbital, Thom Yorke, Gorillaz
**He even sang us one of his dad's songs one morning at sunrise...about a pirate who takes a bubble bath. Adorable. Beyond. Words.
Posted by LJP at 4/22/2010

I am sure I speak for all the Canadian Cowboys; we truly enjoyed having you and Jen around the Boys Camp. I have memories that can not be explained even through fiction.

I will take it upon all Canadians to thank me at some point for dispelling a plethora of the outlandish roomers about Canadians.

Until our next dance off

P.s. I will find an mp3 of kids song for you

Thanks, KSC! And feel free to forward this link to the remaining 13. We miss you guys!

Only because you’re our Sweet Little San Francisco Treat.

Oh good! We love being compared to Riceroni! :) Stay tuned for a superspecial party invite, courtesy of the SF gals.

I did learn a few new things though;

1) I need to stop dating my neighbors and begin dating Canadians (neighbors with manners who are courteous, witty, daring and classy)
2) Don’t let my panties out of my sight

This Blog has become a place of learning for me LJP.
Rice-A-Ronie? I had to Google it, may it be a life style factor (I consume little to no rice), or the notion that we may not have Rice-A-Ronie up here in Canada.
I knew of the slogan, but I presumed that it was to do with a cultural/community reference specific to the people of San Fran. “Come experience a taste of the Sweet San Francisco Treat, a cultural experience you will never forget…” NOPE, to my surprise and amusement… A bole of F-ing RICE!

My apologies, I really dropped my panties on this one…

Juanita, how you make us blush…
Manners…(yes),
Courteous…(yes)
Witty and darling… (of course)
Classy… this one was unexpected, but we will take it
I tell you my ego is super bloated right now

hot damn that's a good photo. you girls really were lucky running into such a group of devilishly handsome gentlemen.

The one and only Timmy T