Camping...with a Bit of Flare 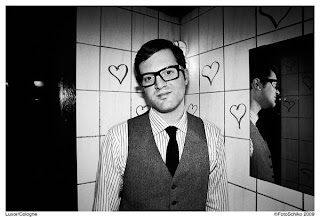 It took us a little under 2 hours to get from Costa Mesa to La Quinta, a perfect stretch of highway for listening to some of the Coachella bands we wanted to check out. Jen took this opportunity to introduce me to (read: insist that I experience the splendor of) Mayor Hawthorne, her new favorite artist/crush (see above pic). Extolling the glory of Absinthe, his song “Green-Eyed Love” has been a top choice on her ipod for a little while now. Approved.

Upon arrival at our destination city, we hit up the Trader Joe’s for our camping food and, of course, a stunning assortment of cocktail ingredients, not least of which was a bag of dried chili-dusted mangos. I guess if you’re the kind of person who travels with a lemon press (e.g. Miss Jen), you’re also the kind of person whose buys dried chili-dusted mangos to add a little flare to your camping cocktails. Why the hell not? After all, I was In It to Win It this year, wasn't I?
Gourmet food and beverage in tow, we pulled in at our campsite and found that our fellow campers would be within our general age range, contrary to the photos of retirees from the Eisenhower Generation featured on the campground Web site. An hour later, our tent was pitched, our cocktail hut was erected, and a few lucky campers were invited to join us in the first batch of top-shelf margaritas. We even let them sit in my new camping chairs. Let the games begin.
--------------------
Full disclosure: I was the one who both owns and brought a collapsible cocktail hut to Coachella. I guess all that glamping last summer really made an impression. So be it!
Posted by LJP at 4/21/2010