Turn Up the Tourism 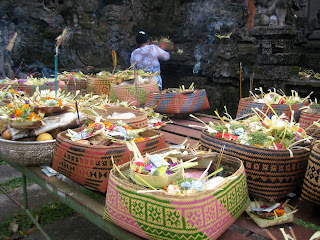 With just a few days left in Ubud before we’d be moving on, we decided to pick up the pace a bit. This meant increasing the speed dial from “Holy Shit, We’re Slow” to “We’re Pretty Slow, Huh?”

Some of the things we did were:

Checked Out a Shadow Puppets Show which wasn’t as cutesy as it sounds like it would be. We were kind of hoping for an assortment of fraggles and unicorns but instead the show depicted a culturally significant story involving traditional characters from Hindu epics. But it was still cool to see the shadow characters play out their little drama against a rice paper screen, backlit by a flickering oil lamp.

Made an Offering at Puri Darem Temple. Why? To cure Michelle, of course! As suggested by the healer, she had to make an offering of “5 young coconuts” in order to return to a state of health. Rather than pay Komang and his dynamic healing duo to do this for her, she took the situation into her own hands.

With our friend Deb in tow, we trudged through sweltering Ubud one morning to a gorgeous Hindu temple, clad in our Balinese best. This particular day was some special holiday (I promise it’s impossible to track them all), which meant that the local families were there to pray and make offerings. Inside the temple was a truly incredible sight—an explosion of fresh flowers, colorful baskets filled with incense (see above pic) and some of the most precious children you have ever seen.

Since we now knew how to participate in the Hindu prayers, we were able to join the locals. Once the priest blessed us with holy water, Michelle marched up to the alter with her 5 coconuts. Trailing behind her, I carried two offering trays provided by our friend Abud’s mother. (He was one of the guys who worked at Melrose Place and when he heard about our experience at the healer, decided that we best make a visit to the temple. It should also be noted this sweet boy also climbed a tree to get Michelle her young coconuts.) Hopefully, Brahma, Vishnu, Shiva and all the other Hindu gods were smiling down upon all of us that morning.

Climbed Mount Batur in the dark. After two and a half hours of climbing up the rocky exterior of this still active volcano, our path aglow with the light from our trusty headlamps, we made it to the top. Up came the sun (wow!), off came our wool hats and away we went with our handsome guide to explore the craters that remained from previous volcanic eruptions.

Hung Out with the Monkeys at The Monkey Forest which resulted in a narrowly averted health emergency when one of them bit Michelle on the leg--hard! Luckily, her cargo skirt took the brunt of the attack. (Confession: I was secretly monitoring her for signs of seroconversion flu for the remainder of the trip. Post script: she was fine.)
Posted by LJP at 5/18/2009