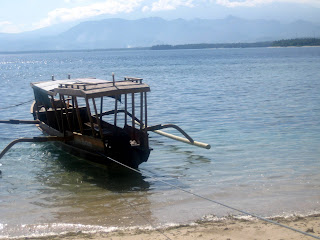 After a heartfelt goodbye to the boys from Melrose Place, a driver loaded us in his car and deposited us 3 hours later in Amed, a small fishing village Northeast of Ubud. And for the next week or so, we focused mostly on fish—both to admire in their native habitat and to eat with Balinese-style salsa.

Amed
One notable thing about Amed, we learned, is that hotels don’t let you use credits cards to pay for your room aaaaaaaand there is no ATM around. Anywhere. This convergence of factors led us to hire a driver to take us to the nearest town with an ATM, about 45 minutes away.

An exciting result that came out of this little trip is that the ATM turned out to be located in a shopping area that included a Balinese superstore. There we found all kinds of treasures including an entire aisle full of different rice cookers—one for every imaginable ricing need. Note to self: consider doing a study of superstores around the world to see what one can learn about the local culture based on the inventory of mass-produced items. Sad? Yes. But also kind of fun.

After making 1 new fun friend who turned out to be my neighbor in SF, a 2-night stay at our kickass hotel, and a 3-hour snorkel expedition, we hopped a “fast boat” followed by a medium speed glass bottom boat followed by a slow and smelly horse and carriage to our next stop: the Gilli Islands.

Gilli Islands
Technically in Lombok, the culture of the Gilli islands (we stayed on Gilli Air) was a bit different from Bali. In addition to speaking a separate language and practicing Islam rather than Hinduism, the residents of these 3 small islands don’t use motorized traffic (it’s the law). Instead, transportation is all about boats, bicycles and the horse-drawn carriage. Yee haw!

Life moved pretty slowly on Gilli Air. When we weren’t snorkeling around (we saw Sea Turtles!), we were eating coconuts, chillin’ in beach huts and contending with the local beverage of choice, called Arrack. Note: when this (kind of nasty) alcohol is mixed with orange juice, the resulting cocktail is called “Arrack Attack” which is kind of fun/unPC.

One notable occurrence on Gilli Air was that we met this cute guy (oddly reminiscent of Namond's character on The Wire), who worked as a server at an outdoor restaurant near our hotel. He saw us engaging in an inspirational photo shoot involving Michelle snapping what turned out to be some blurry shots of me swinging back and forth over the water...pretending to be carefree and islandy.

Surely anxious to get in on this artistically promising endeavor, he suggested that Michelle join me on the swing, which promptly ended up in the two of us piled on top of each other covered in sand. Yep, our combined weight was more than this little swing could handle. To make matters worse, Michelle then got tangled in said swing and the cute island boy had to free her. So much for our budding careers as white-girl Indonesian supermodels.

Lovina
We returned to Bali via the fast boat and jumped in a car to Lovina, another fishing town located on the island’s Northern Coast. There, we stayed for two nights in a fancy hotel that apparently catered to older European couples wearing sun hats. Nothing much went down on this leg of our journey other than finding a note in our room before we left, thanking us for our stay. It was signed “Room Boy.” And it was for reals.

Pemuteran
And to complete the Great Balinese Snorkel Tour of 2009, Michelle and I drove out to Pemuteran. Located in the far Northwest coast, this town borders the Bali Barat National Park. Here we saw the most colorful and exciting fish I have ever seen (counting that time I melted down on the Great Barrier Reef). We also got to boat all around a mangrove where Michelle dedicated herself to the honorable persuit of crab sightings. Meanwhile, I laid in the sun and polished off Skinny Bitch, considering the ill effects of all the Balinese coffee I had consumed. Oh well.

We also learned about an interesting coral restoration project that's getting attention all over the world. Equally colorful and exciting were the local school girls who put on a badass traditional dance performance one night. Check 'em out.