Smartwools Get Their Day in the Sun 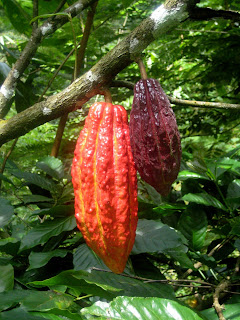 After seeing just about all the fish (and crustaceans) we could possibly see, we ventured South, up into the mountains. Recommended by SF brethren whom we met in Amed, Munduk had a completely different feel from the rest of the island. Still lush and moving at the snail’s pace we had now grown accustomed to, this area was much cooler (love that mountain air!) and had a more rustic feel. Think coconuts meet….s’mores?

We wound up staying at an eco-hotel called Puri Lumbung, a picturesque collection of two-story cottages all of which are renovations of the original Balinese rice barns (called lumbung). Each cottage was made entirely of wood with fairy tale-style wooden shutters and beds draped in exotic-feeling mosquito netting. Our cottage was right on a little lake and the view from our balcony could not have been more serene.

Our first night there Michelle and I got massages followed by a leisurely dinner at the hotel restaurant. With the mountains of Munduk as the backdrop, we ate our Goda Goda feeling very relaxed, spacing out to the sounds of traditional Balinese music (to hear what it sounds like, check out this video I found on YouTube). A few hours later, we snuggled in beneath our mosquito netting and enjoyed our first night sans “Air Cone.”

The next morning we were up and at ‘em (confession: As recently as 5 years ago, I thought that phrase was “up and Adam” until my sister busted me and told my mom which resulted in a flurry of mocking emails). Preparing for a long hike on muddy trails, I parted with my growing collection of sun dresses and dug out those sneakers and Smartwools that had worked their way to the bottom of my pack.

After breakfast we met up with our guides and off we hiked into the forest where we saw an impressive amount of native fruit and spices, doin’ their thing: cloves, coco (see above pic!), lemongrass, date palm, ginger, Balinese rice, Bay leaves, vanilla beans, nutmeg and others, too. The guides, it turned out, could identify just about anything in the forest and tell you about its cultural history, nutritional value and its various uses in Balinese cooking. I bet if I had asked them nicely, they would have been able to create a working replica of my iPhone out of bamboo and berries.

About 2 hours into the hike, Michelle and her guide had to head back to the hotel so she'd be on time for her afternoon cooking class (look what she made!). Meanwhile, my guide and I continued onward and upward and he taught me about the most expensive coffee in the world, which, it turns out, comes from Indonesia. It’s called Kopi Luwak and it’s made by harvesting coffee berries that have been eaten by the Asian Palm Civet.

Apparently, the berries pass through the animal’s digestive tract (aka “come out the other end”), mostly undigested. (Since the civet can only digest the berry’s outer layer, the remainder passes through its system at which point they are called coffee "beans.”) The beans are then scooped up from the forest floor, washed off, and sold as an international delicacy.

The theory is that this fox/mouse-like animal only eats coffee berries of the highest quality when they are at their perfectly ripe point, which means only the very best beans make it into the brew. It's kind of like if a really snobby and stylie gay man were in charge of a high-end second-hand clothing store. Yeah, like that.
Posted by LJP at 5/27/2009