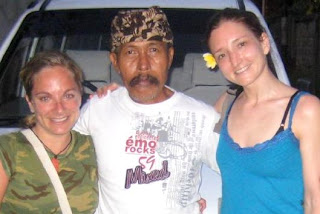 The next day we woke up at our usual time (5:45am, when the Balinese roosters started crowing), ate another fruit bowl and mentally prepared to visit Komang’s healer. Michelle was terrified that he was going to tell her “something bad.”

Before she could reconsider, Komang shepherded us into the backseat of a jeep and drove us beyond the borders of Ubud. Wait! We love it here! Why are we leaving? Where are you taking us? Visions of this show I once saw about foreigners getting sold into the sex trade flashed through my head. As we drove through some sort of upscale jungle neighborhood, he assured us that everything was fine. Then we pulled onto a dirt road…and kept going.

We wound up in dusty compound consisting of what appeared to be multi-family homes. Komang was greeted by a few different people who were all quite friendly and didn’t seem to have the air of sex trade kidnapper about them. We started to relax.

He led us to one home and suggested we wait on the outside porch area until the healer and his assistant arrived. There we sat for about an hour, drinking tea and growing anxious about what we would soon learn about our bodies, the people we loved and our fate. (See? Wouldn’t this be a good show?)

The healer, a curious-looking fellow, finally arrived (see above pic). He was about 60…with a gold front tooth and a mustache, sporting an “Emo Rocks” T-shirt and a traditional head dress. His assistant was a pretty young woman. Neither spoke a lick of English.

Warming Up
Komang followed them into the house, which revealed itself to be a small temple. We took off our shoes, put $20-worth of Rupiah on the alter and knelt on the cool marble floor (note that this was ½ as much as our hotel room cost per night). For the next 20 minutes, the female healer led us in prayer and religious song. We learned the Balinese Hindu prayer, involving a beautiful interaction with incense, flowers, and holy water.

Having grown up agnostic in a small Catholic town in NJ, situations such as this tend to bring back uncomfortable memories of those post-sleepover mornings at church with my friends' families where I would sit alone in the pews while everyone got up to take communion. We would stand up and sit down, again and again, all the while watching my friend for cues as to what to do next. While I sat through unfamiliar songs about our savior, I’d think about the x-treme fort building from the night before, new ideas for the front walkway or the back deck popping into my head. But this was different. I was completely absorbed.

Michelle’s Questions
When we finished the prayers, Komang told us we could each ask a few questions. With his translation help, Michelle inquired if there was anything she should know about her health. The female healer asked for her last name, lit some more incense and began talking to the alter—as in having a conversation with someone…or something. The two healers collaborated for a few minutes and then an answer was presented. This is where things started getting intense.

Our Hindu gurus were dead on...to the point where I started sweating a little. They knew about Michelle’s lower back injury (OMG, the one she got when she was 15 while playing field hockey). They also knew that the back of her neck had been bothering her for a while (true!) and that she had recently experienced some dizziness (yep, while doing yoga that morning). Knowing Michelle as well as I do, I was already aware of these health issues…and was shocked by the accuracy of this assessment.

Michelle asked some other questions about her family (I’m not sure how revealing those results were. Michelle?) and then she asked about her love life. She wanted to know who she would marry and when, damnit. Nodding, the female healer lit some more insense, reengaged in her eerie conversation at the alter, and whispered with her teacher for a few minutes. She then told Michelle (via Komang) that, in approximately 4 years, she would fall in love with a man who has a strong connection to Saudi Arabia. Huh? Would he be an oil tycoon? A prince? How and where would she meet him? Unfortunately, the specifics ended with Saudi Arabian. Damn.

My Questions
I was up next. Michelle went out to the porch with the male healer who was going to do some massage on her lower back. Curious about my own health after recently experiencing a weird issue resulting in minor surgery and brief painkiller abuse, I also asked for an assessment. The answer I got was not what I expected.

The healers agreed that my body was in perfect health (really? hooray!) but that there was a problem with my heart, not related to anything physical. At first I was confused what this meant, but then it became clear….and the tears started flowing. There was indeed something weighing on my heart and this woman knew exactly what it was. She described the situation in chilling detail and assured me that everything that had happened was for the best. She even explained why.

I’m not sure if it was the topic of discussion that sent me over the edge or the fact that this 90-pound stranger in some Indonesian compound was completely in tune with something so personal to me…or maybe it was that I hadn’t slept past 5:45am in a week. The reason for it was unclear, but the next thing I knew, I was having total meltdown. I cried like I hadn’t cried in years to the point where I think I made everyone uncomfortable (except for Michelle who knew me when I was taking this really hard statistics class that brought me to tears on a regular basis. Plus, she falls apart about neglected animals all the time—so she knows how it is).

By the time I pulled myself together and we bid our farewells (note how red my eyes are in the above pic), it was like we had all been through something big together. And if Komang did intend to scam us, he was now very surprised…and very exhausted. Ha! Kind of like in that movie where the bad guy steals the car and there’s a kid in the back seat and the trailer voice over announces that the bad guy “got more than he bargained for.”

I wondered if we would now become the girls in line at the organic café, talking about our personal growth. Well, one thing was for damn sure: I was never going wear a Michael Franti shirt.

That gave me the chills ... Glad she was right and reassuring.