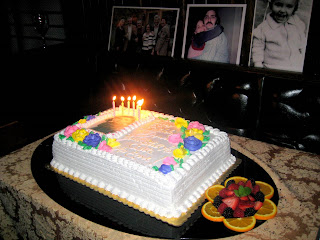 My mom was dreading her 60th birthday. Despite the fact that many of her friends had already reached this milestone (including my dad), she just couldn’t get used to the idea...and very much wanted the event to pass by unannounced. Every time I told her she was being ridiculous, she reminded me how I flew to Ecuador for my 30th birthday so that I could escape all forms of acknowledgement. “At least I’m not fleeing the country,” she responded. Note: My mom always makes me sound dramatic. I kind of like it.

As her birthday approached, her only request was that we didn’t make a big deal about it. What she said she wanted most was for my sister and me to come home for the weekend, and for the family to have a low-key dinner together. She reminded us of her hope for a quiet, private birthday when we were all together for Christmas, making us promise not to “pull any tricks.” We agreed.

A few weeks into January, my dad called me at work with a “great idea” for my mom’s birthday—a big surprise party! “Dad! You KNOW what mom wants,” my sister and I protested. “She would hate that.” Unwilling to take no for an answer, he proceeded to draw up a guest list and shop around for party locations. We had no choice but to help him.

Little by little, the party came together and it was turning out to be quite an affair. Aware of the background story, the girls at my office would burst out laughing every time my dad called me at work to inform me of another celebratory element that he had added into the mix. They would overhear one-sided conversations such as, “You ordered a strawberry-filled sheet cake with WHAT on it? (Silence.) Dad, seriously. Mom will freak out when she sees her face superimposed into butter cream icing.” That one just about sent them over the edge.

The scenario felt like it had all the makings for a documentary that’s intended to expose how dysfunctional its subjects are—Michael Moore style. I could just see the interview with my Mom, who would be wrapped in a blanket on the couch. She’d tell the camera about how aging is depressing and she wants nothing more than to slip into this new decade on her own terms--with zero fuss. The next scene would cut to my sister and me at the Staples Print Center requesting poster-size photos of her to hang all over the walls of the party location. “Could you blow this one up in full color? Thanks.”

Finally, the day had come…and my mom was furious with my dad for working past midnight all week. Little did she know, he had been making a video for the party featuring clips from her childhood, etc. Meanwhile, my sister, her boyfriend and I raced around town picking up happy birthday balloons and sparkly confetti. We laid the groundwork with some believable lies about the night ahead of us...and everything was in place.

In a matter of hours, our room at this restaurant was transformed into a shrine for the reluctant birthday girl. As much fun as we were having, I couldn’t help but get a pit in my stomach every time I thought about my poor, unsuspecting mom walking into the big “surprise!”….and having to pretend she felt like celebrating…with the people we had decided were her 50 closest friends.

Later that night, all the guests arrived on time and gathered together under my direction at exactly 7:30pm. Sure enough, the text came from my sister a few minutes later communicating that they had pulled into the parking lot. They walked into our room and 3, 2, 1…“Surprise!!”

My mom was confused...and then…. (Waiting for her reaction felt a little bit like that scene in A Christmas Story when Ralphie shoots his Red Ryder BB gun in the backyard. For a few seconds it's unclear if he shot his eye out. You know his glasses were knocked off his face, but you're not sure if he would be blind or not.) Sure enough, everything turned out OK. In fact, she was thrilled!

I guess the lesson learned, for my sister and me, is to refrain from doubting a man who has been married to a woman for more than 35 years--even if that man is your dad and he seems to be making a very bad judgement call about your mom. Then again, the lesson learned may actually be to refrain from trying keep up with our parents' friends who we now know can out-party us hands down. Apparently, 60 is NOT the new 40--it's the new 21. Either that, or it's the new Mardis Gras.
Posted by LJP at 4/14/2008

okay, your mom is such a good sport! And it sounds like you all had a great time. Give her my best wishes and tell her she has the patience of a saint!