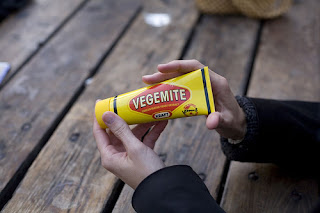 So my mates from down under came and went. They overcame their jet lag like champs and dove right into the game. Chris had been here before so it was nothing short of heart-warming to watch him show Amy around the city. (He was here visiting me for 6 weeks in November/December of 2005 during which time I gave him an excellent education on SF livin,' as far as I'm concerned). I felt like a proud parent when he told me he took Amy to Dolores Park AND Hot Cookie in the Castro one day while I was at work--atta boy.

Speaking of Dolores Park, my two guests tried to order sandwiches at the Dolores Park Cafe...only to be misunderstood 3 times in a row--poor peckish little things. Apparently, "takeaway parcel" doesn't quite communicate food "to go." Another accent barrier that I find rather amusing is that they can't use automated phone systems here in the States. Whenever Chris tries to call the airline to deal with his "return ticket," the system asks him questions like, "Did you say...unicorn?'" Well, not quite that bad, but BAD.

Anyway, the kids from down under had a good time in SF. I'm hoping they forgive me for organizing a surprise party for them at Zeitgeist. Surprise! All my friends are wasted and making poor attempts to imitate your accents.