As it turns out, I have a lot of Jewish friends. I didn't plan it this way--it just kind of happened. Heb has a theory that unless you're from New England or the Mid-Atlantic states, you probably don't have a good sense of humor. However, she notes 3 exceptions to this rule: gays, Jews and people with trauma histories. (Recently, someone submitted another exception for consideration, but I'm not going to mention it until Heb officially signs off.)

Anyway, maybe I surround myself with so many Jews since their quick-wit keeps me smiling. That, and after all, they are my people--halfsies style. And my friend Sherry is definitely my people. I was hoping to spend Passover with her this year, but it turned out that she wasn't simply going to attend a seder. Nope--she was going to recreate the Exodus experience in the desert. Ummmm?

So while I was at EJ's seder getting loaded on Manachevitz-tinis with the A-gays, Sherry was "wandering" through the Southern CA desert where she was awoken each morning to the sound of a shofar in preparation to pay homage to the end of Israelite enslavement to Pharaoh. Upon her return, I pretty much forced her to tell me all about her experience with "Passover In The Desert." Following is what she had to say.

The participants were separated into 10 "tribes." These groups were smaller posses where people knew you, could support you in your journey, check in, etc. 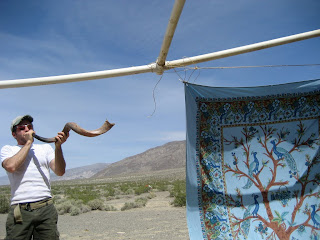 Each morning, we were awoken and called together for activities by the sound of a shofar (see above pic). There were pre-breakfast "offerings" such as women's yoga, chi gong, deep ecology hikes, and a Jewish vision quest. On afternoons, you could hike, vision quest on your own, take part in other offerings, or just lounge in the dome (see below pic) or the "sanctuary". 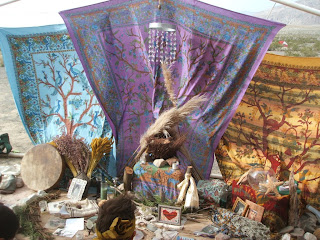 There were Friday night and Saturday morning Shabbat services and (Saturday evening) Havdalah services held in our dome and around the campfire. The services included hand drums, chimes, singing, and dancing out in the desert wind.

On Saturday night, the different tribes acted out elements of the seder around the campfire, with some playful-yet-provoking riffs on the story. There was also an ancestors theme, in which we were asked to recall and share stories about our ancestors.

2. How many people participated? How would you describe them?

There were 80-90 people on our trip whom I would describe as open, connected, clear, playful, intelligent, and loving. 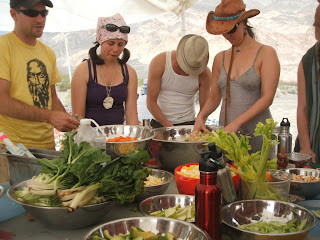 Mostly we ate soups, quinoa, salads, eggs, some fish, fruits, olives, nuts, and of course, matzah. I didn't get around to baking matzah in the solar oven as I had planned--there was just too much going on. Also, someone else had pre-made "shamura matza" (meaning that the flour has been guarded and never touched water before the 18 minute prep time allowed for baking kosher matzah).


4. Does anything stand out as particularly memorable or special? 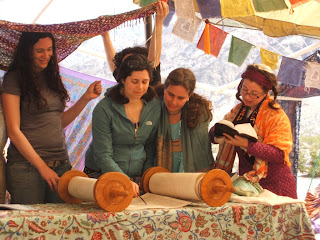 It was truly awesome to have an actual Torah out with us in a wilderness area. This particular Torah was rescued from the Holocaust (see above). Also, hearing the story of Moses and the 10 Commandments as chanted by four women--out in the sun, wind and dust--was pretty powerful. I also loved being summoned together by the sound of the shofar.


5. The organization's website notes that the group will "travel far from home and into unfamiliar surroundings to experience the original holiday, get away from the mundane “enslavement” to our everyday lives and habits and see whether observing Passover in the wilderness deepens our appreciation for and understanding of the teachings around Exodus." Would you say it did?

Definitely. It was pretty powerful to have a conscious, cohesive Jewish community of like-minded outdoorsy, enviro, Burner types. It was also breathtaking to experience this in a desert environment, connecting to the land and to Jewish tradition.


6. Would you go again? Recommend to friends? Absolutely! 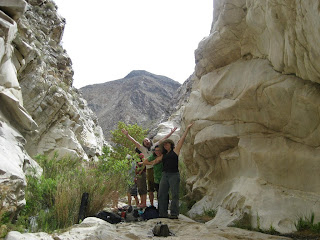 Fun fact: In Hebrew, the land of Egypt is called Mitzrayim, which literally means “the narrow places.” Metaphorically speaking, Passover is an opportunity to liberate oneself from whatever is constricting or enslaving you.

My formula is perfect- there will be no additions.