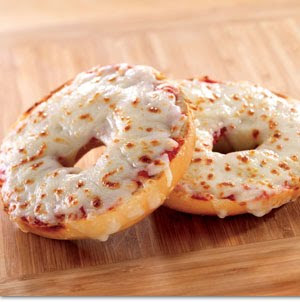 A few years ago I became friends with a local comedian who has an identical family makeup to my own: an Italian dad, a Jewish mom and a younger, same-sex sibling. We traded hilarious stories about what it was like to grow up with such, err, "animated" parents and he clued me in on the official term for children with this particular ethnic heritage: Pizza Bagels!*

As a result of this mixed background, our family holiday traditions don't really follow a standard set of practices. For example, while we do celebrate Christmas (woot!), our holiday breakfast usually consists of an elaborate spread of fresh bagels, lox and all the fixings. And once we've opened our presents, we drive over to my mom's sister's house where for many years we spent the day with our Jewish grandparents, eating noodle kugel (pudding) while gazing at their Christmas tree...erected by my aunt's Greek husband...who would often make a big tray of baklava for dessert. The whole thing is kind of comedic, really, yet to us it was just the way things were done.

This year, my sister, her boyfriend and I flew to NJ to spend Christmas at home. On Christmas Eve, we all hopped in the family car to participate in our long-standing tradition of driving through town, admiring the lumanaria bags that line the streets. Secretly, this is a chance for my parents to check out everyone's holiday decorations, commenting on who did a respectable job with their lights and who went overboard this year. Meanwhile, my sister and I (and now Jon) sit in the back seat and fight over whether the radio volume and/or heat should be turned up or down.

As we were driving around this year, we came upon a house that admittedly could have looked a little neater. A mishmash of colored lights were draped haphazardly over unkempt hedges behind holiday-themed robotic Santas that popped in and out of plastic chimneys at random intervals. My mom took one glance at the set-up and deemed it an "ungepatchke" display. Nodding in agreement, my dad scoured, flicked his wrist as if to write it off and called it "shongod" as we turned the corner.

Now, of course, my sister and I knew that my mom found the display to be overdone (ungepatchke in Yiddish) and my dad thought the whole thing was a complete mess (shongod in Italian--spelling?). Meanwhile, Jon--a North Carolina boy with a Southern accent to boot--had no idea what anyone was talking about. Not really one to upset the flow, he simply shrugged his shoulders and continued to look at the decorations under consideration.

The next day, we went to my aunt's house for our usual Christmas celebration. This year, we ate a Christmas ham accompanied by a Greek salad. Then we debated which of our Yiddish names was the biggest mouthful (my cousin Jane won with Zusa-Zisse)...and laughed until my mom declared her kishkas hurt.


*Some people prefer Jewtalian and others Matzagna (matzoh + lasagna), but I'm partial to Pizza Bagel.