Glamping In The Great Outdoors 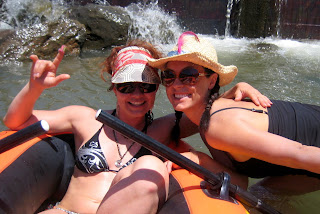 Last weekend my friend Zetta (of Rick and Zetta fame) hosted a full-fledged girls' get-away at a snazzy vacation house up in the Russian River. There were 11 of us, 2 hot tubs (if you count the one in the Lifestyles of the Rich and Famous pool), a billion fashion magazines, 1 fire pit, and approximately 300 pounds of food, mostly consisting of strawberries, exciting salads and s'mores. The weekend pretty much ruled, especially since I got to break out my French braiding skillz, around the fire pit no less! And if it makes you happy to believe that we all wore ruffly nighties and giggled our way through champagne-induced pillow fights, you can. Who am I to rain on your parade, especially so near to the 4th of July?
Anyway, at the end of the weekend, 2 of the girls (see above pic of Josie and Louise) asked me if I wanted to go "glamping" with them for an extra night, returning to the city on Monday. "Huh?" I uttered, totally confused. "You know, when you camp outside, glam style," they explained, "with fancy food from your cooler and a blow-up mattress in your tent." I was totally in.
So off we went into The Great Outdoors. After we parked the car at our cush little campsite (complete with one of those wooden landscape scenes with holes where people can stick their faces while someone takes their picture from the other side), we blew up our rafts and paddled into the river. There we spent the day laughing at ourselves for various reasons including the fact it took us hours to figure out how to tie our rafts together without floating into riverbank in the process. Hours! And, yes, we had oars.

An additional complication arose due to the fact that I had not been planning on glamping, or rafting for that matter, and the best I could do for "water shoes" were my canvas espadrilles with a high platform heel and a buckling strap around the ankle. Since exiting the river entailed regrouping on the beach side and then swimming back across to the campground side, it felt like too much effort to buckle and unbuckle my shoes, which were waterlogged after being tied to the handle of my raft all day. So after I put on my shoes in order to contend with the rocky "beach," I attempted to swim across the river in them, which turned out to be, err, the more work-intensive option.

Visual: me in a polka dot bikini, holding onto a large inner tube, doggie paddling my way across a 4-foot deep river while being pulled under by what felt like 10-pound weights on my feet. Every time I kicked my legs, the large and motley gathering of local river goers would see a high heel espadrille pop into the air at which point I would observe their perplexed reactions, start laughing, and then choke on the water--a cycle that repeated itself many, many times. I told one concerned-looking guy (who was wearing a wife beater and a Marlboro hat) that I was training for a Navy Seal test. Unclear if he bought it.

Regardless, glamping was a great success and I may have even improved my swimming endurance along the way.
Posted by LJP at 7/03/2009