In the Knick of Time 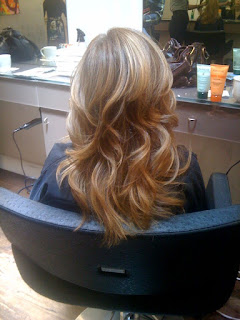 With Pride coming up, I found myself in a panic over my hair. No, I'm not going to be dancing on a float in front of thousands of people nor am I attending any formal events. In fact, I'm going to be out of town this weekend. Then why the panic? Well, the boys (and girls) start arriving in San Francisco early in the week (as in NOW), and I'm certainly not going to have a repeat of my 2007 Pride experience, when, clearly, I was ill-prepared.

What happened was that on my way to the Pride parade a bird dive bombed my head outside the Safeway store...and these two stylie gay men witnessed the scene. Rather than curse the bird and ask if I was OK, they took the bird's side! Their attitude was that it served me right since my hair, according to them, looked like a nest. Bitches!
Well, this year I'm READY! In fact, I got my hair done at a fancy salon today. I made the stylist PROMISE that it would be as unnestlike as possible. No birds will be landing on THIS head, no siree. (Side note re this stylist: He used the word "edit" to talk about cutting my hair as in, "Don't you worry, girl. We're just going to make a few edits to your back layers. It's going to look fierce." Love him! See above pic for edited back layers: revealed.)
Anyway, on the theme of Pride, I wanted to give a shout out to my friend Nick who is one of those SF friends I was so lucky to meet back in the day, and who still hangs out with me many years later, despite the fact that my hair sometimes looks like nest. There are many reasons that I'm proud of Nick including his recent acquisition of a hard-earned M.F.A. in Creative Writing, his first-ever, brand spankin' new BOOK DEAL (yeah, you heard me) and his gradual rise to cute outfit domination (see below pic). But most importantly, I'm proud of Nick...for being Nick. 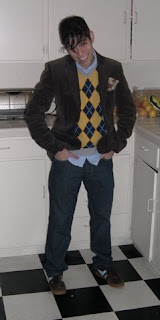 I don't always get it 100% right when it comes to explaining my good friend's personal journey in perfectly PC terminology (still struggling a little with Queer vs. Gay and, for example, if it's ok to ask a FTM for a tampon if you're pretty sure they have one in their bathroom)...but I'm getting there.

In the words of Harvey Milk, "I like to sit in the window and watch the cute boys walk by." And I love that Nick is now one of those boys...

book deal?! Laur, get Nick to help you get one too. Do it!