Indonesian Sisters to the Rescue. Or Not.

As it turned out, our jeep driver RULED. His name is Made (a common Balinese name pronounced “Mah-day”) and there was NOTHING he couldn’t do. When he’s not busy driving glamorous visitors like us to all the best secret spots in Bali, he’s out on the town performing and teaching traditional Balinese dance. He also sings, cooks, plays music, parties, makes good jokes (in English no less) and gushes about how great his family is. Certainly, he could add modeling to his potential activities list, but he’s probably too humble for that. Case in point.

We had a fantastic day with our boy Made, driving through the towns surrounding Ubud where we checked out craft-making like Batik fabric, silver jewelry, and traditional wood carving. He even stopped to casually play (beautifully) a Balinese xylophone that was lying around one of the shops (see below pic). While finishing up yet another lunch of Goda Goda, it became apparent that we would need to make an emergency stop at a drug store as the immediate need arose for feminine products (details spared). 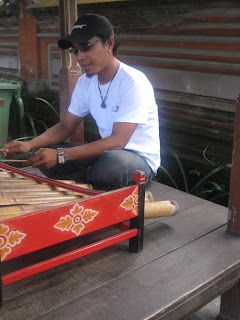 Rather than explain the situation to Made, Michelle told him that we REALLY needed toothpaste (ummmm?) and next thing we knew, we were pulling into another one of those Indonesian superstores with a special aisle dedicated to rice cookers. Being the doll that he is, Made offered to accompany us, but we politely declined, telling him we’d be right back.

It’s still not exactly clear what was going on in this store, but suffice it to say that they had every feminine product EXCEPT for tampons. We’re talking at least 50 different alternatives stocked on 5 different shelves each 15-feet long—everything from hello kitty-style pads with pink wings and (were those sparkles?) to industrial sized Kotex monsters that really should have been located in the diaper section. Eww. We did our best to find what we needed and eventually gave up and flagged down help. After all, this was an emergency situation.

The woman who tried to help us looked to be about 25, certainly of reprodutory age. She didn’t speak very much English, so we did our best to explain what we needed which resulted in a blank look on her part...and growing desperation on ours. She soon disappeared, returning with a coworker who actually spoke even less English. Ugh. “Isn’t the world 'tampon' universal?” I asked Michelle. Completely at a loss for how to make ourselves understood, we began to demonstrate to our Indonesian sisters what we needed using made up sign language. Surely, they would understand.

It was during this explicit demonstration that we noticed Made standing behind us, dying laughing. He had gotten worried about us when we didn’t return to the car and came in to track down and scoop up his two American girls. Judging by his reaction, he understood what we needed.

The three of us left together in a mix of awkward silence and knowing giggles and Made took us to another store where we scored the goods, purchasing some toothpaste just for good measure.
Posted by LJP at 5/30/2009