A Uneventful Walk Through the Rice Paddies 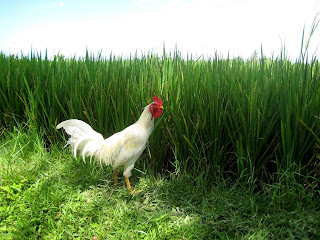 The next morning, we woke up feeling anxious to continue our exploration of Ubud. So we downed our fruits bowls, dodged Ping and Komang before they could book us for God knows what, and hit the road. We walked across town to a path that would lead us to the Rice Paddies. By this time it had to have been 100 degrees.

Eventually we found a trail through the woods that took us to the edge of the rice paddies. Not sure what to expect, we walked up a steep path and suddenly found ourselves in a clearing. Stretching out before us were acres and acres of bright green grasses shooting up out of water, water that was reflecting the early morning sun. It was stunning. I had never seen anything like it.

The path led us around in a huge circle. We walked alongside chickens, under palm trees, and past charming buildings that appeared to be guest houses. We strolled by local artisans who had set up their work along the path and stopped to marvel at the incredibly precise upkeep of the paddy fields. Who worked here? Where was everybody? We guessed that whoever it was, they must be smart enough to get out of dodge before high noon since the heat had now become unbearable. We were drenched in sweat…and running out of water.

“Let’s bounce,” I suggested to Michelle. She snapped one last picture of a chicken (poooossibly, her favorite animal of all time) and we were out. "To the spas!," I declared, attempting/failing to wipe the sunscreen-sweat-bug repellent mixture out of my eyes.


Note: I later learned that “rice is the number one crop in Indonesia but the rice paddies have started to disappear. As tourism has become a billion dollar industry, Balinese are abandoning farming. Rice paddies are now being replaced by golf courses, hotels, villas, and industrial parks. On average, Bali is reducing its rice production by about four thousand tons per year.”
Posted by LJP at 5/16/2009