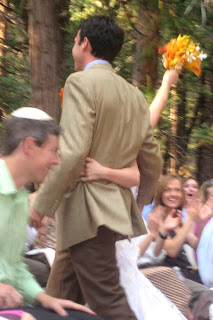 Heather was my very first real-life roommate (not counting those few depressing winter months following college graduation that I spent living with some buddies in Portland, OR...before I realized I don’t seem to thrive in sun-starved locations. Read: wake up every day to the sound of MORE rain and fight back tears while wondering if my shoes had dried from the day before).

As I was leaving the Pacific Northwest—soaking wet in an all too familiar mix of cold rain and hot tears—and moving down to San Francisco where I had scored my first real job, a friend of mine put me in touch with Heather. Someone had moved out of her group house in the Haight and she needed to fill the room. A few days later, I moved into a cheery Victorian on Belvedere Street…and my shoes dried out for good.

Heather was a girl who had hit her stride as a young, single woman. Freshly out of a relationship with her high school sweetheart who was off to med school, she was fabulously busy every night meeting up with friends, attending work-related social events or staying in to entertain all sorts of people with dinner parties, movie nights, you name it.

One grade ahead of me in school, Heather had been livin’ the San Francisco city life for almost a year at that point. As far as I was concerned, she was an expert on all things SF as evidenced by her command of the public transportation system (wholly impressive to me at the time), recommendations for affordable ethnic take-out (very worldly, I remember thinking) and fun ideas for weekend trips. She was the perfect person to show me the ropes. And that she did.

We had all sorts of adventures living together in that house, which somehow became a revolving door for curious short-stay tenants. We sat back and watched these people come and go—everyone from a 7 foot 1 (no joke) semi-pro basketball player who subsisted singularly on hot dogs to an electronica DJ who mysteriously made ends meet by selling wood jewelry that he carved between the hours of 3am and 5am. At one point, we decided it would be a good idea to rent out my room for a month or two and have me stay with Heather in her room…in her bed. Why not? Then we split her rent and “made” $250 each for the month! We were practically rich!

Heather and I wound up moving together to a new house and staying in good touch after she eventually left San Francisco for grad school. After years of trading hilarious—and not so hilarious—dating stories, Heather met Pete. And that was that. In July, they got married up in Yosemite—the perfect spot for Ms. Envirofab and Mr. Ourdoorsman to come together.

My friend Heather set another example for me that day, almost 10 years later. She moved into her next phase of life with a remarkable focus and the utmost confidence. And I watched from beneath a canopy of redwoods, in dry shoes.