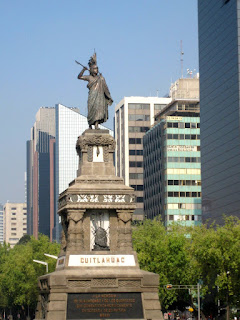 After what seemed like a very quick flight to Mexico City, I met up with Marisa and we spent the morning walking around Colonia Roma—the Brooklyn-esque neighborhood now home to her adorable Irish friend, John. Over café con leche and a freshly-made plate of enchiladas, we caught up on the details of Marisa´s first few days on the scene. I eventually admitted that my flight mistake was worse than hers...and my amiga and I settled into our yellow plastic chairs watching the neighborhood come to life.

Who knew Mexico city would be so…fancy? Apparently, I´ve seen too many movies featuring drug-crazed gang members kidnapping unsuspecting young girls on pastel-colored bicycles and selling them into the sex trade from which their handsome older brother has no choice but to rescue them.

Well, not on this corner! Here we had a teahouse featuring international specialty teas, a high-end wine bar and a modern-looking stationary shop. And most of the people walking by were dressed way cuter than us. Note to self: next time you go to Mexico, bring stylie scarves and effortless-but-not-really linen pants.

In an attempt to describe Mexico City, I'll say it's a colorful cross between Miami and Washington DC…at least the parts of it that we were able to see. Walking around the busy downtown, your path is lined with statues of famous Mexican revolutionaries looking out from behind the rows of massive palm trees. Taxis blast their horns, people protest all sorts of seemingly important things (hard to decifer all the acronyms) and teenagers congregate around the vibrant installations of public art--right now an expo of innovative city benches, perfect for lounging on with a cigarette in hand while you wait for your friend to finish painting her protest sign.

Our favorite intersection features a looming statue of the Aztec warrior, Cuitlahuac, drawing his bow and arrow against a backdrop of corporate skyscrapers (see pic above) as if to spear some young punk seconds before he pickpockets a grandmother purchasing fresh ingredients for her famous tomales.
Posted by LJP at 6/27/2008