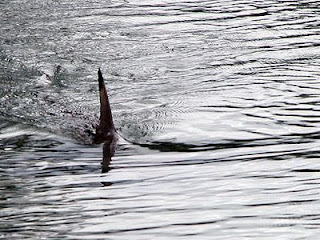 Some people are afraid of snakes and some people fear bugs and some are in a constant state of panic about imminent natural disasters like tsunamis and earthquakes. While falling into a pit of hissing snakes or having an army of angry ants crawl all over me or being trapped under heaps of earthquake rubble aren't particularly appealing thoughts, I could certainly think of worse plights. Aside from an over-dramatic reaction to the sight and even the thought of worms (ew, ew, ew) and an irrational fear of this one horror movie character that's been plaguing me since 6th grade (yes, I'm still too scared to even type this character's name), I find nothing more terrifying than a big, gray, toothy SHARK.

Perhaps this fear is somehow related to my poor swimming skills, not that I could out swim a shark if I had a stronger, more consistent breast stroke. Or maybe it comes from the fact that my dad watched Jaws at least once a year (sometimes the complete trilogy) throughout my impressionable childhood years, beckoning me to sit with him for "just one more scene"--which usually wound up being the "boring part" where the manly sea fisherman, the shaggy-haired researcher and the sensible police chief compare battle scars and talk about the USS Indianapolis tragedy over shots of whisky as that clever sea monster begins to attack their boat from below (note: I no longer find this scene boring).

Or possibly, it has something to do with the "Jaws attack" that happened at the Universal Studios boat/tram tour that my family took while on vacation one year. I remember being scared out of my 11-year-old mind when the mechanical great white jumped along the side of the boat. Yes, we all knew it was coming (my dad warned me more than once), and yes, I knew that sharks didn't live in California amusement park lakes, but at that moment when the fake shark leaped into the air, I was SURE I'd be his next victim.

For this reason, I forbid myself from watching all shark-related movies, which is particularly necessary now that I live near the ocean, an ocean with SHARKS right off its shores. The last thing anybody wants is some hysterical girl screaming like crazy every time a surfer falls off his board. And for a while, it worked. I even got myself to go scuba diving in Australia in waters where sharks are known to hang out. It was on this excursion that I learned about the story of the abandoned divers who were supposedly eaten by sharks--the story upon which the movie Open Water was based.

Just shy of a year later, I finally got up the courage to see the movie. My first mistake, other than breaking the no shark movies rule, was watching it alone, late at night. I know better than that--much better. My second mistake was not turning it off as soon as I found myself in a state of sheer panic, jumping at every little sound coming from the street below (considering I live above an Irish pub, there was a serious amount of jumping going on).
Unfortunately, I got through the whole thing and somehow fell asleep not long after the disappointing yet horrific final scene. Sure enough, I found myself awake at 3 am after a particularly terrifying shark nightmare, or sharkmare as I prefer to call them. I fell back to sleep and...more sharkmares.

It's now been 4 days since I saw the movie, and I'm still thinking about sharks--as in all the time. The interesting part about this particular fear is that there's simply no chance that a shark is going to get me any time soon as I plan to remain safely on land. At least if my fear were related to, say, MRSA (the scary, contagious kind) or gang-related violence, I'd kind of have a point. But nope, what's keeping me up at night (literally) is my fear of a great white shark attacking me anywhere between my home in the Mission and my office located downtown on the 8th floor of a big building.
Posted by LJP at 12/05/2007

Just a couple of weeks ago I came face to face with a dead baby great white shark after a day of scuba diving at Monastery Beach. Where was the mother??? That's what I wanna know.

I had no idea! Perhaps you should have built up to Open Water- maybe start with Finding Nemo and work from there.

I have trouble watching movies that feature airplanes...

A friend of mine who is half Jewish and half Italian calls herself "Jewtalian" (sounds better than "Italish," I think)

forget that hollywood crap lauren, here is the real love story of sharks and people on the west coast! i like to check this site now and then to see what i'm getting into...
http://www.sharkresearchcommittee.com/pacific_coast_shark_news.htm