Let There Be Pig 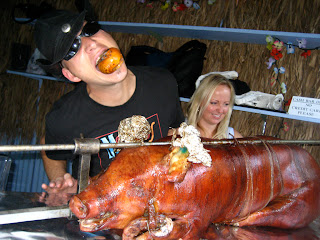 The Spring before I started college I got a letter requesting my attendence at a regional event where I would meet other soon-to-be Freshman at my university in the fall. The theme of the event was to be "Southern" in a weak attempt to prepare the NJ, NY and CT kids for what awaited us in North Carolina. "Oh good," I thought to myself. "Maybe there will a be a mechanical bull."
A few weeks later, my parents and I arrived at a beautiful private home somewhere in CT. I walked in to find about forty 18-year-olds milling around nervously half chatting with their parents and half scoping the scene. Well coordinated staff served mimosas to the adults and an impressive spread of bagels and lox (score!) had been displayed elegantly on the terrace. The event felt like anything but a down-home Southern BBQ. In fact, was that Giuliani by the fruit salad?
Eventually things loosened up a bit. As the afternoon unfolded, the parents began to indulge in fancy wine while chatting with one another about their jobs in "the City." Meanwhile, we kids played the name game about our potential shared friends from various New England and Tri-State summer camps and soccer/hockey teams. No one really seemed to notice that there was a pig roasting on the back terrace. Everyone's attention was focused elsewhere--namely on the Yankee game. Each time someone would report in with the score, a passionate rumble would break out. This group was about as Southern as a snowman...wearing mittens from L.L. Bean.
And so the stage was set for my four years in North Carolina. Although I loved that warm sunshine and those road trips through the Louisiana Delta with my dear college pals born and bred in the Bible belt, I never really took to the whole Southern thing. Yeah, I ate my fare share of hush puppies and knocked back a respectable amount of moonshine, but hell if I was going to pick up an accent or buy a new outfit for airplane travel (in retrospect, I still find that practice extremely curious). No siree--I had debutantes to mock and 18 years of Jersey pride to uphold. And as for pig pickins? I left those to the locals.
Fast forward 13 years. I'm now living in California and my time in the South is long behind me. It's true that few things make me as happy as the sweet tea from Memphis Minnie's in the Lower Haight. And if forced into it, I might be willing to admit that I prefer magnolia trees to California eucalyptus any day. Nevertheless, I'm done with pigs and onto bigger and better things....like avocados. Enter Rick and Zetta Reicker.
In celebration of Rick's 35th birthday, his wife Zetta (aka Champion Pumpkin Carver) had decided to do something extra special. No doubt inspired by her man's deep and unwavering dedication to bacon, Zetta announced that she would be hosting an all out pig roast in his honor.
Next thing I knew, in came the evite indicating, "We'll be roasting a tasty 68 pound pig from Heritage Farms. He lived a happy free range life and he has given himself to us to celebrate this Saturday." And then up went Rick's IM status message: "And the wife said: Let there be pig." And soon after, across town went all their friends to partake in the roast.
On my way to the birthday event, I thought about those pig roasts from my past and how they were never really that much fun. But the minute I walked in the door to RICK's pig roast, it became clear that I just hadn't been approaching them the right way. Apparently, the way to make a pig roast REALLY fun is to:

As it turns out, y'all, pig roasts are way more exciting than I had given them credit for. Perhaps I need to reconsider other Southern traditions, under the leadership of Rick and Zetta. Maybe next year they'll throw an incest party...and I will know better than to cast doubt.
Posted by LJP at 11/07/2007

excellent use of y'all