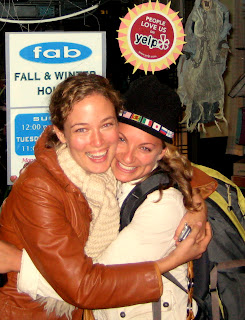 I met my friend Heb (nickname) when we were five years old…in Kindergarten. As I remember, we actually had very little interest in one another initially. I was busy running around with my bff at the time, whom I knew from ballet class. She and I had all the important things in common: cartwheel perfection pursuits at recess, dance routine choreography in our basements after school, and an all-consuming obsession with the movie Nadia.

Heb, however, was extremely shy and enjoyed playing quietly in the corner of the room with her bff, Jennifer. They were both very sweet—just not my speed, frankly.

Then one day our teacher approached my mom and Heb's mom, suggesting that they encourage us to spend some time together. "I believe your daughters could really learn from one another,” she advised. “Heather would do well to come out of her shell a bit and Lauren could certainly use a dose of serenity in her life (i.e. turn down the spazz)."

Being first-time parents, our moms heeded our teacher's recommendation and set up a few play dates (which, in 1980 likely entailed watching Magic Garden in the family room while my mom smoked Virginia Slims in the kitchen against a backdrop of harvest gold appliances). And the rest is history. It's not exactly clear what bonded up so deeply. Our shared passion for complex fort building? Premeditated neighborhood mischief? A love of Ssips iced tea boxes? But from that point forward, Heb and I were a force to be reckoned with.

As it played out, our Kindergarten teacher’s plan sort of backfired since I wound up dominating our duo without taking on any of my new friend’s demure characteristics. Then midway through second grade, my family moved to her street which meant we pretty much hung out every single day. Heb quickly joined me in a life of x-treme spazzdom to the point where future teachers refused to let us be in the same class due to “inappropriate behavior.”

It’s true—we couldn’t control ourselves around one another. Once one of us would start laughing, it was utter mayhem for the remainder of the period. And it didn’t help that she had a cough that sounded remarkably similar to a seal bark for approximately, oh 10 years, a cough that was activated by hysterical laughter. Nor did it work in our favor that we found just about everything to be overwhelmingly funny, (including bitch bunch which she still swears she had no part in—unlikely).

Much to our teachers' dismay, Heb and I hung out together all through middle school and high school—we carpooled to swimming and tennis lessons (she was way better at both), Brownies/Girl Scouts (I sold more cookies without a doubt) and eventually high school (I drove us since I'm 7.5 months older and got my license first).

We also went to day camp and sleep-away camp together, shopped for our first bras together (we settled on Calvin Klein), dated hopeless yet adorable boys together, and simultaneously overdid it with the Sun-In for several summers in a row. She came to cheer for me at my gymnastics meets, I fidgeted through her piano lessons, she led the way with makeup and fashion, I sneaked her junk food when her parents became Macrobiotic. And when my parents implemented new phone rules Freshman year of high school in a desperate attempt to encourage better homework habits, we used our babysitting money to get walkie talkies. There was no stopping us!

After being separated through college and grad school, we came back together in San Francisco when she moved here with her boyfriend (now husband) 3 years ago. As planned when we were 7, I stood next to her on her wedding day.

So the sad news is that she’s moving to LA in a few weeks. Of course we’ll still see each other, but it won’t be the same as having her right here. Not only will I need to get a new earthquake response plan (she and her husband were going to save me if the big one came…or maybe I’d save them) but I think the hardest part is that I’m going to have to change my emergency contact on my HR form. While thinking about this makes me a little teary, it also makes me smile to remember what happened the one time she was called upon to help me in an emergency--not counting when I got my tonsils out (age 17) and gall bladder removed (age 22) and she came to the hospital both times to cheer me up. (I sweeeear I don't have a weak constitution.)

Here's what happend: Last year I had to go to the ER. I called Heb to let her know, and she raced to the hospital to sit with me. As soon as she got there, we started misbehaving--we just couldn't help it. Once it had become clear that I would be OK, she opened her purse, rummaged around a bit and insisted, “Here, Laur, put on some makeup, already. You need to consider that your doctor could be cute. Now hold your paper gown in place while I apply this mascara.” By the time the doctor came into the room, I looked like I was about to attend the Oscar's and we were hysterical. Our behavior was totally inappropriate, which made it even funnier.
Posted by LJP at 10/17/2007

I am now tearing and giggling at the same time.

Laur, we are still on the same fault line, and you are not off the hook for saving me in an earthquake. I don't care if the rescue team has given up- keep digging. Love you, Heb

Damn, Magic Garden? I used to watch that show sometimes. Does that make me gay?

aww this is a wonderful ode to friendship and growing up together. You two are so lucky!