Tea, Sugar and a Dream 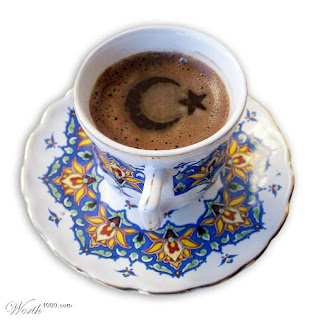 Deep in thought, I lost Rob in a sea of enthusiastic Turkish middle schoolers who were on a field trip to the Palace that day (unfortunately, I wasn't much taller than them which made me hard to find in the crowd). Headed sola to another mosque, I wound up walking around with this Turkish guy who looked to be about my age. He revealed himself to be a school teacher who specialized in historical architecture, and he agreed to show me around. Score.

Following his surprisingly kickass tour, we hung out at a café where I had a Turkish coffee and he ordered apple tea. (For those of you in SF, I brought some home. You MUST try it!!) Sipping my grainy drink, I apologized for having forgotten how to say thank you in Turkish. “Oh that’s easy,” he explained. “It’s tesekkür ederim, which sounds like ‘tea, sugar and a dream’ to you English speakers. And if I were up on my fortune telling techniques, I’d look at the leftover grounds of your coffee and tell you which of your dreams will come true.”

I thought to myself how annoyed I’d be if an American guy EVER proposed reading me the remains of my soy latte on the corner of Valencia and 16th over the noisy beeping of his blackberry. Yet somehow in Turkey, in the shadow of an ancient mosque above a lantern lit cistern, the scenario was nothing short of majestic.