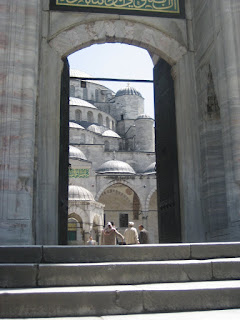 In case you’re wondering, The Blue Mosque (left) and the Hagia Sofia are just as breathtaking in person as they are in photos. And they’re particularly stunning at night when they’re lit up, attracting mosquitoes...that attract birds...that circle above (Mickey’s theory re: the birds).

I continue to have difficulty accepting that buildings like this were conceived and erected before AutoCad and jackhammers were part of the construction process. No wonder all the statues of Greeks and Turks feature such nicely defined muscles—that marble must have weighed a ton (or whatever measuring system they used back then). Note to self: find some marble to lift.

The building that got me to think the most, however, was Topkapi Palace. Home of multiple Turkish sultans and supporting “staff,” this place struck me as the 17th Century’s equivalent of The Playboy Mansion with a twist of dysfunctional orphanage—kind of like if Hugh Heffner rather than Daddy Warbucks had adopted Orphan Annie…but in Turkey and in the 1500’s. Upon Lonely Planet’s recommendation, I purchased the audio tour and cruised around the Palace grounds, learning about the lives of the former residents of this impressive compound (up to 500 people lived here at any one time).

“Directly in front of you is a stone pit. At the time of Sultan so and so (too hard to remember which Sultan since there were A LOT), this pit was filled with water and functioned as the Palace swimming pool. During parties, it was common for dwarfs to perform fire dances on small boats for the Sultan and his associates.”

“To your left is the eunuchs’ quarters. The eunuchs played an important role at the Palace as they were responsible for running the day to day business and educating the Sultan’s concubines about history, art and palace etiquette. As you may know, the eunuchs were males who had been kidnapped from Africa and whose testicles had been removed, allowing them to remain focused on their duties at the palace.”

“Welcome to the bath house and note the window above you. It was here that the Sultan’s harem would come to wash and gossip about palace life. From the window, the sultan would spy on them, learning key information about his empire.”

There’s SO much more I want to know about this royal scenario. Like, were the concubines friends with the dwarfs, perhaps splashing around in the pool with them between “private” sessions with the sultan? And were the eunuch’s bitter about being dismembered all for the sake of educating the concubines about the right shoe to wear to the pool parties? And what was the harem gossiping about—whose head scarf was the most fashion forward? If MTV’s Real World had been around back then, the goings on in this group home would have been riveting!
Posted by LJP at 5/23/2007