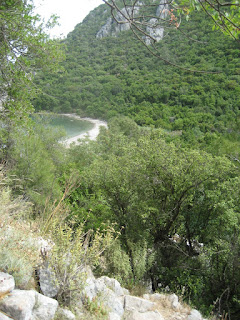 For the next couple of days, Mickey and I cruised up the coast in our “Ah-veez” rental car (we discovered that if you pronounced it "A-viss" no one understood what you were referring to). Heading the warning of our Ah-veez rep, we waited “at least 5 seconds” at every green light before hitting the gas as Turkish drivers tend to operate with a liberal interpretation of when a red light officially means stop. For this reason, it’s best to wait a little while before entering each intersection. No bother—more time for us to work out meters to miles conversations while on the go, which turned out to be way harder than expected.

The first stop on our coastal drive was Olympus, the site of 7th Century ruins. Once supporting a flourishing Lycian community, Olympus now attracts 21st Century backpackers who are drawn to its spectacular setting, party vibe and tree house accommodations. And judging by the number of people on the backpacker circuit who share stories about their nights in Olympus, I'd say it's still flourishing.
It was in Olympus that I hiked up a cliff in my high heeled sandals to check out a well preserved acropolis with a gorgeous view (see photo to left). Why hadn’t I opted for the dirty red sneakers that day? “What happened to form over fashion?” Mickey asked, forced to carry my backpack in addition to his own. “Why don’t you put a sock in it and eat another orange—it might lighten your load a bit,” I shot back with a smile, grabbing a lemon tree branch for support as I descended to the rocky beach.
Had I been more responsible with my footwear, we would have been able to check out the mysterious Chimera, a set of flames continually burning from a nearby rock. According to Rob who visited Olympus the following week, the Olympic Games were named after this town, using the eternal flames to light the ceremonial torch. I wondered if The Bangles knew about this.
Posted by LJP at 5/23/2007