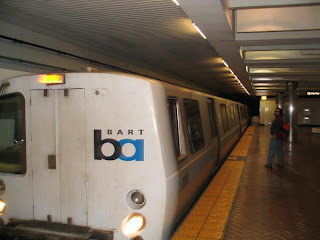 A tremendous sociological phenomenon occurred today on the 8:30 AM Pittsburg/Bay Point BART train. Crowded and uncomfortable, we passengers were irritable and seemingly devoid of all sympathy for our fellow riders. People were pushing, no one was moving over so that the small people could hold on to the vertical bars (since they can't reach the ones on the ceiling, a hardship I know all too well) and the prevailing attitude was one of general disdain.

Suddenly, the BART conductor announced over the loud speaker in an angry female voice: "If you DON'T move away from the DOORS, this train is going out of SERVICE!" This conductor didn't care to warm us up with even one "Please stand clear of the doors, thank you"--she meant business. The train remained stopped at the Mission/16th station where I had boarded. About 30 seconds later another admonishing notice belted out from the load speakers dripping in venom, "If you want to be late for work, just keep standing near those doors." And another followed shortly after, even more furious than the others, "You know what doors look like, don't you? Well move away from them or we're not going anywhere."

Now sharing a common enemy, we passengers let go of our previous frustrations resulting from the crowded train conditions. After all, next to high volume fury forced upon you before 9 am, pushing and bad train etiquette seem like a walk in the park. We began to function as one group, giggling at the mockery these two guys had made of the conductor. In their best bitchzilla impression, they imitated her with perfect inflection and flawless recall. The icing on the cake was that they ad libbed bonus additions such as, "this train is going out of SERVICE...and I'll come in there and rip the head off of anyone within 5 feet of a door."

It was as if harps started playing and the sun came out from behind a cloud. Suddenly, the tall men stepped away from the vertical bars allowing the small women to hold on safely. Passengers, previously smashed up against someone else, moved over as best they could to give their neighbor a bit of breathing room. And then Tiny Tim limped down the center aisle and peeped "God bless us, every one." (OK that last part may not have happened exactly like that.) We had been united by our common hatred of the mean conductor.

And why do I call this phenomenon the Substitute Teacher Effect? Think of how all middle school and high school students, popular or not, drug pushing or weigh lifting, male or female would transcend social stratification, grudges and rivalries in order to outsmart and/or berate a substitute. It was considered a failed class period if a sub managed to hold onto power and force her students to carry on as though the "real" teacher were there. As if. Well, at least not at MY highschool.

The substitute teacher classroom was the one environment in which the social rules allowed for the jock to buddy up with the skater dude in order to take down the enemy. And then after the bell rang, everything returned to normal. The jock would dash over to his pals for some high fives all around and the skater dude would walk the other way, flipping his hair and smashing his skater babe up against a locker, planting a kiss on her mouth, defiantly outlined with thick, black lip liner.

And the February 21st, 8:30 am Pittsburg/Bay Point train was no different. For one morning, on one train car, coffee carrying commuters, bearded homeless men, and Asian grandmothers transporting large plastic bags full of fresh produce managed to come together and share a laugh. Before we knew it, the doors had closed and the train started moving toward downtown.

And then something shocking happened. When we got to Civic Center, the conductor announced the station with a trace of kindness in her voice. Could it be? Had she been moved by the heart-warming passenger bonding resulting from her abusive announcements? Had she been humbled by our response and was now seeking to change her villainous ways? Sure enough, at Powell, she was even NICER!

And what happened then...?
Well...in BART-ville they say
That the conductor's small heart
Grew three sizes that day!
Posted by LJP at 2/21/2007