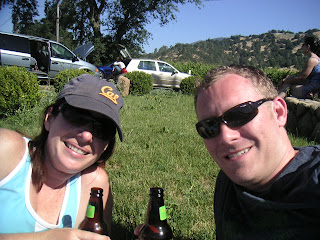 Those of you who didn't know me back in the summer of 2006 missed my I'm-Still-An-Athlete-Damnit phase culminating in a 26 mile inline skate marathon up in Napa Valley. Sustaining more longevity than my Slow-Cooker-Creation-Every-Sunday phase and eliciting more wide spread disapproval than my Mandatory-Creamed-Sherry-For-All-House-Guests phase, my months of unwavering dedication to Inline Skating proved to be one of my more humbling phases in the past several years. And just when I had picked up the pieces of my shattered ego, I noticed a warning message on this year's marathon website, a direct reference to my team's dismal performance last summer.

Beginning with a haphazard marathon registration, the I'm-Still-An-Athlete-Damnit Phase got off to a difficult start. Before I could effectively concentrate on training, I had to first put to rest the collective fear of countless friends that roller blading can only lead down one path: eventually dating a painfully enthusiastic (and potentially closeted) man who sports jean shorts and a fanny pack. I'm not exactly sure how this sport earned such a reputation, but I will attest to the fact that it's pretty much universal and deeply ingrained among most people I know.

Once the violent protests died down a bit, my two team mates and I found training to be an uphill battle too easily thrown off by last minute weekend trips and hangover interference. Despite our less than adequate preparation process, we arrived at the starting line ready to race since we were "athletes" and would be "just fine." In short, the 26 miles crusade didn't go exactly as planned. My two friends wound up ducking out of the marathon half way through with aching legs and blistered feet and sat around in the sun drinking beers while waiting for me to finish the remaining laps (see photo above). I crossed the finish line hours later, collapsing on the ground a in dramatic mix of exhaustion and despair.

At the awards ceremony, the race administrator tipped us off that it might have been a bit much to attempt a full marathon as first time skaters. Now this year's web site reads: "26 miles on the Silverado Trail is a lot to bite off for a first time inline skater. If this is your first time in a roadskate event, we invite you to come participate in the Half Marathon at the member rate." Not only are they suggesting that first time skaters avoid the full marathon, but they're giving them a discounted rate if they'll take the advice! Mortifying...

My team mates and I decided the other day that we're going to redeem ourselves and try again this June. Supposedly, the training will begin soon. Let this serve as the official announcement that team "Two Redheads and a Blond" is back with a vengeance--and we're not beginners anymore.
Posted by LJP at 2/07/2007

I can see the planning committee sitting around a table saying, "Remember those yahoos last year? We'd better put a warning up on the site to prevent that happening again this year."

Funny you should mention the stereotypical guy who rollerblades. My old boss at this failed startup in Jersey used "coolblade2" as his AOL address. Undaunted that someone beat him to straight up "coolblade" he actually had the lameness to append the 2.

To the point, his masculinity had a certain air of uncertainty about it, spilling over into insecurity (over his height -- a little below average, hairline -- a lotta bit above the forehead), so much so that he overcompensated by laying on the machismo, like another side business selling cigars online. Even better, he actually had a first date template he used to employ on every first (and presumably last) date with some hapless woman he'd stalk by checking if their AOL messenger account was active or not; if it was, he'd pounce and make it look like an accident.

Anyway, the startup is long gone. I wonder whether his rollerblading days are behind him as well?