Sorry for the long lapse. The transition back to SF took a little while. Not only did I have to readjust to looking the "other" way when crossing the street (harder than it sounds!), but I felt compelled to respond to many a taunting email and voice mail, mocking me for not being able to hang with the intro to scuba crew. Luckily, one of my friends, who initially gave me the hardest time, later mistook a photo I sent him of a crocodile in the Cairns Zoo as a risky close up taken in the Aussie wild. So now he thinks I'm brave. 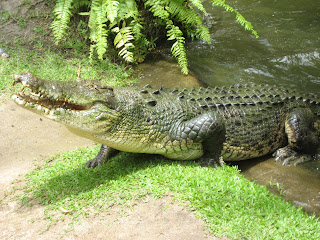 The other rough thing about coming back was the unusually cold weather here in SF, a far cry from the long summer days in Sydney. Apparently, I've lost whatever tolerance for the cold I developed throughout all those frosty winters in Jersey when I'd wake up to the sound of my dad shoveling, salting and sanding our driveway. (I would have helped were all my energy not focused on the important task of willing the public school mother's phone chain to launch into action announcing a snow day....from under the covers.)

Without a working heater in my apartment, I found myself among my fellow Mission residents in line for a discount space heater at a shady Mission "electronics" store. Based on the way we were behaving, you would have thought this was the Blizzard of '78. "Ay, que frio!" we complained to one another as we rubbed our hands together dramatically and sipped hot coffee. For a brief moment, I considered stocking my fridge with cold cuts, but then I remembered I haven't eaten sliced ham in at least 15 years and it wasn't nearly cold enough to snow...and the only phone chain I'm now part of is the one where your friend gives birth and you pass on the news...and still get out of bed and go to work.

I was there to witness Laur's search for a heater. Initially, she turned her nose to the offerings of the combination electronics/luggage/grocery stores, but eventually settled on a lovely ceramic model. She then purchased a 2 dollar gigantic churro (which she pronounced correctly when ordering- with trill) and a set of decorative spoons.