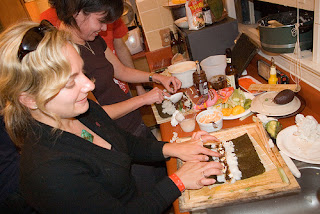 One of my friends here in SF, a self-identified foodie, likes to host events that involve some form of cooking. Past party themes include The Deep Fryer Party (bring something to throw in his deep fryer and see what happens) and Thanksgiving Dinner (an opportunity for 30+ people to practice their new recipes before real Thanksgiving rolls around--think church dinner meets debauchery). People go ALL OUT for these events and the competition tends to be impressively steep.

This past weekend he and his roommate hosted a sushi making competition. The idea was that the hosts would provide sticky rice, seaweed, sushi making tools and all the fixings, and the guests would each bring whatever they wanted to include inside their roll. Each competitor had to make enough sushi pieces for all the other competitors to try. Every roll was then judged by the amount of applause it received when formally announced by the hosts at the end of the evening (a highly accurate method to select the winner in any contest as utilized by my sleep away camp to determine the coveted title of talent show winner).

Still riding the Aussie wave, I entered "The Vegemite Roll" (alternatively titled the "G'Day Mate") which consisted of Vegemite, sour dough bread and melted butter. I swear it's way better than it sounds. In fact, my entry came dangerously close to taking the crown, beating out "Thanksgiving Dinner" (a roll complete with stuffing, cranberry sauce and turkey) and "Worms in Mud" (Nutella with gummy worms). Sensing my disappointment, one of the hosts created a "Most International Roll" category special for me so that I could win, too. Apparently, I'm still at sleep away camp.
Posted by LJP at 1/31/2007

Yes, a sleep away camp with sushi. I went to one of those.

Laur, How did you find the Speers Eljabar website and how has it not been closed down at this point. I love that you went to a Christian sleep-away camp.