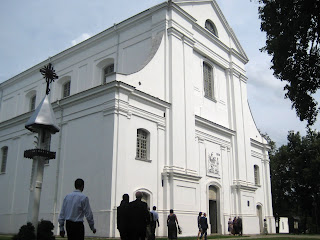 The foreigner van dropped us off at the wedding church where we unloaded and milled around for a while in the shade. While Nate and Lina were busy greeting guests, I stood by while Stauber took a few calls from what I guessed to be his trading colleagues. Each time he'd answer, he'd get a serious look on his face and respond with, "Ok, yeah, sell" or "mmmm...let me get right back to you on that." It all seemed very Wall St. with a hint of Hollywood. I liked it.
With Stauber preoccupied for the time being, I was left on my own to survey the premises. After some thought I concluded that their wedding chapel was one of the prettiest I had come across, which is really saying something since I visited (read: was forced to visit) just about every "iglesia" one can visit throughout the entire nation of Spain...and then some. Towards the end of the semester, every last student in my study abroad group could identify and describe in detail the features of their favorite cupola. (Today, my friend Brian would would offer his nerd call on that one: "nerp, nerp.")
After a beautiful ceremony, of we which understood next to nothing, we went back outside for an extensive photo sesh (complete with a clergyman in a druid outfit). Then we were loaded back into the foreigner van, presumably headed for the reception site. By that point we had given up hope on the bride-and-groom bridge crossing, assuming it was just a rumor created by the locals to scare the hell out of Nate. Or maybe once they heard about the beaver, they decided he couldn't handle any more "local traditions?"
Posted by LJP at 10/09/2010