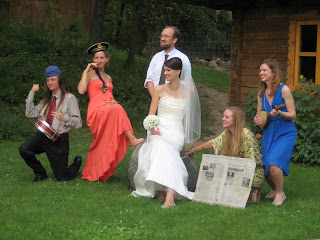 After the bridge-crossing feat, we made our way to a picturesque home in the woods that seemed to belong to the wedding photographer. The living quarters hinted of a fairy tale where one might expect to find a despondent Baltic maiden with some kind of magical pet who helps her to overthrough her evil oppressor. Did she live here for real or was the property only for photo shoots? A lot of questions went unanswered that day, but I was OK with that as it made things seem even more mysterious and exotic.
The next question had to do with costuming. Why was it that members of the wedding party were being photographed with various unrelated props? I was pretty sure Nate was no sax player and that his sister, Amy, had nothing to do with the navy (above). Was it some kind of Baltic tradition? This went on for at least an hour while the rest of us snacked on pickled vegetables and salmon tea sandwiches.
After a few more series of curious photos, we got back in the van, unsure of what would come next. The Lithuanians seemed completely at ease with all the posing and shuffling around whereas the Americans were bewildered as to why they weren't drinking yet.
Posted by LJP at 10/11/2010