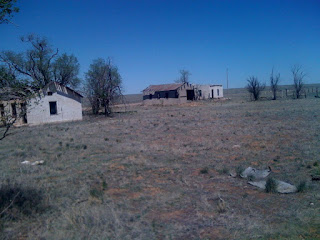 A few weeks ago, my friend Mo told me that he had booked a plane ticket to New Mexico where he'd be meeting up with his parents and uncle to "take care of some family business." Having known Mo quite well since our Burning Man adventure in 2007, I could sense that there was a story behind this plane ticket--a rich story. Something about this trip had intrigue written all over it.

After some dedicated prying, I learned that in 1970 Mo’s grandfather, Armand DeJong, had purchased a town in New Mexico located about an hour east of Albuquerque. As the story goes, Armand had spotted an ad in the local paper for a "ghost town." After convincing his business partner that this land would be a solid investment as it had its own stop on the passenger railway between Albuquerque and Santa Fe, the two men purchased the town for a grand total of $25,000.

It's really not clear to me how the men planned to draw inhabitants back to the town, all of whom had vacated in the 1950s...or if that was ever their plan. What I do know is that Armand's business partner later decided that he no longer wanted his share of this investment, and Armond bought him out.

Flash forward about 40 years to the time of Armand's death. In the process of completing paperwork and finalizing the last of his affairs, his children (Mo’s mom and Uncle Peter) stumbled upon their dad’s deed to this town. Unsure what to make of it, they contacted an Albuquerque real estate agent, scheduled an on-site meeting with her and convinced Mo to join them on their investigative expedition.

Mo for Mayor!
It’s at this point in the story that I become aware of the New Mexican ghost town, begging Mo for information. “Do you think it will be haunted?” “What if there’s gold or oil there and your family becomes instant billionaires?” “Does anyone still live there? If so, are you automatically their new mayor? And if so, will you leave San Francisco in order to go rule over them?” “Oh! Do you think you should contact Ira Glass and have This American Life go with you to film the expedition?”

After what felt like an eternity, Mo returned from the trip and we met up for Thai food. He informed me that his family made it to the town and walked around for the afternoon. Much as he suspected, everything there was completely desolate and dilapidated, with the exception of a working water well that hadn’t been used in decades. There were a few abandoned buildings (see below pic), their adobe brick literally crumbling to dust in the desert wind, and that same railroad track traversing the town. 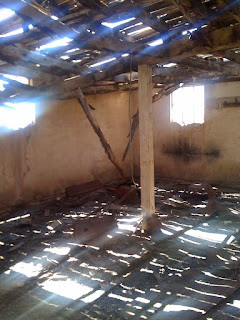 Only one building looked sound enough to enter. Inside they found an oil-powered turn-of-the-century knife sharpening machine along with some rusty beer cans that looked to be from the 1950s. It was as if time had been frozen and they could almost see a group of young railroad workers with James Dean and Elvis haircuts sneaking off on their lunch hour to knock back a few while they discussed our Russian enemies and the impending war.

More to the story?
Uncle Peter talked with the real estate agent about possibilities for selling the land, its value now estimated to be a mere $15,000. But was that really all it was worth? What if Armand knew something back then that we don’t? After all, his hunch about investing in Florida swampland turned a 10-fold profit when the swamp was later drained for a large-scale development operation.

As if on cue, a guy in a truck drove by at that very moment and pulled over when he saw Mo's family and the real estate agent, standing beside a crumbling building. He stopped for a brief chat, and it turned out that he owned a Gypsum rock mining company looking to expand its work area. (Note: I've now learned that Gypsum rock is used to make plaster of Paris and writing chalk).
With the town's passenger rail now operating as a freight rail, this land would be the perfect spot for his operation, he explained. The real estate agent took his number, and it's anyone's guess how this might play out. (Freight train pictured below.) 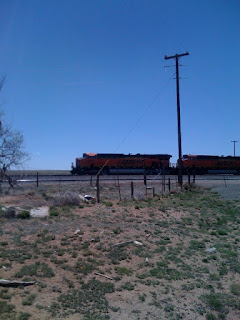 Was this guy for real? If so, will Mo's family strike it rich from plaster of Paris and writing chalk (which would be way more interesting than an oil fortune)? And if not, what does fate hold in store for this little ghost town? Perhaps one day Mo's grandkids will make a fortune when Hollywood offers to buy the town for the filming the No Country for Old Men remake. In the meantime, I’m going to celebrate the fact that there were real-life tumbleweeds there, blowing over the railroad tracks and through the town. (Win!)

And something tells me that Armand DeJong is smiling somewhere, watching his family come together to work it all out.
Posted by LJP at 5/31/2010