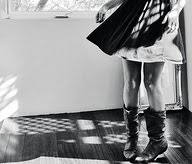 Remember my famous friend Sherry Wong and her high-action art opening back in July? Well, there was something I left out of that story. I normally don’t like writing about traumatic events since we get more than our fill of drama and anxiety-soaked stories from the daily news. But last night a friend of mine got carjacked at gunpoint in the 510 (she’s ok) and her experience reminded me of what happened after the art show. In the hope that it will remind us all to be as careful as we can, I'll share my story.

Picture it: Sunday morning, 7am. I woke up at my apartment in the Mission and chatted with my friends who were still up from the night before helping Sherry, err, clean up after her show. They convinced me to come back over there and join them for breakfast, so I threw on a dress and a pair of cowboy boots and began walking toward Bryant along 20th St.

When I got about half-way there, a van pulled up next to me and slowed down to my walking pace. The driver, a guy who looked to be in his 40s, was watching me through the passenger window, and I just knew the situation was not a good one. Plus, no one is ever around on a Sunday morning in that part of town…until the irritating raw foods cult people begin to make their way to Café Gratitude for an “I am opposed to bikini waxing” organic smoothie. Eventually, the driver pulled over, got out of his van and began walking toward me. I picked up the pace and pulled my signature improv-to-the-rescue move*: pretending to see someone and waving enthusiastically. And it worked! The guy turned back around and reentered his van.

Just as I was congratulating myself for successfully implementing my creative safety move, I saw the van driving back toward me. Shit. I quickly reassessed the situation and opted not to scream (no one would hear me anyway) or call the police (couldn’t lose the time looking for my phone in my bag and talking to the 911 operator) or trying to hide behind an empty building (I’ve learned from horror films that that move pretty much equals knife in back). Instead, I started running at full speed to the art gallery, which was now only a block or two away.

As I was running, the van pulled up next to me again and the guy started yelling horrifying comments at me through the passenger window. There are few times when I wish I didn’t speak Spanish and this was one of them. Eww. I just kept running and reminding myself that he would have to get out of the van in order to abduct me, so as long as he was driving, I was OK. And then he pulled over again.

I didn’t wait around to see if he’d get out or what he would do--haaaylls no. Instead, I picked up my pace, got to the gallery, rang the bell, and raced inside the minute my friends opened the door…and never looked behind me. I told them the story and we looked out the window a few times, but no one was there.

A little while later, I called the police to describe the van and the guy and was surprised to learn that they wanted to interview me. In person. Right away. Hmmmm. I went home and soon after, two female police officers, about my age, showed up. And they were pretty! Hot, even.
I proceeded to tell them my story about the van-driving abductor/rapist/murderer and they stopped me to ask exactly where I had been walking. I told them. Then they asked me if I had, earlier today, by any chance been wearing a dress with boots. Why yes I had, I answered. And then things got a little less heavy.

It turns out that, among other exciting police jobs, these two officers serve as John decoys, posing at high-class prostitutes. Just like on The Wire! And guess where they station themselves and at what time? Yep, the exact block where I had been walking, between the hours of 8am and 9am. And guess what they wear every time? A dress with boots. They explained that I had been walking on what the SF popo refers to as “the prostitute track” at its busiest time of day. “But it was a Sunday” I responded, confused. “Girl, not everyone works Monday through Friday, like you, and 8am is the perfect time for men to make a pit-stop on the way to work.” Eek.

So, we’ll never really know who this guy was or what exactly he wanted. But I did feel better knowing that he probably wasn’t trying to murder me in the back of his van with a chainsaw. In fact, he was probably just as confused as I was, wondering why I’d be literally running away from a perfectly good business deal.

And what can we all learn from this? 1) There is such a thing as The Prostitute Track in SF and it's not a course of study for women looking to get certified in prostitution; 2)Don’t walk alone near Mission Cliffs climbing gym in the early morning unless you're looking to make some fast cash and; 3) Sun dresses with cowboy boots, in addition to being a cute brunch outfit, screams high-class hooker. Someone should tell Miley Cyrus.


------------------
*This move really does work! File it away and whip it out when you need it. To be as convincing as possible, pretend to make eye contact with your "friend(s)" who happens to be standing behind the scary/suspicious person walking toward you. You can even yell "hey!" in a very enthusiastic manner. (Note that the scary person can't be behind you or he/she will know you're faking which would not only be dangerous, but also embarrassing)
Posted by LJP at 2/03/2010