The City By the Bay 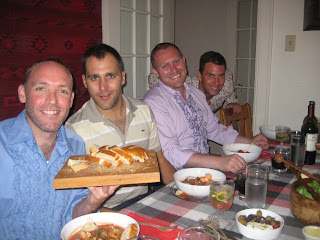 May, 2009 marked my 10-year anniversary in . Yep, in May of 1999 my friend Verd flew across the country to Portland, OR to help me move down the coast to SF where I would start my first real job—the kind where you have to spend your first few pay checks on professional-looking outfits from the Ann Taylor sale rack. Truth be told, I didn’t really like living in . It may have had something to do with the fact that I arrived in February and NEVER ONCE SAW THE SUN in the dismal 3.5 months that I called that city my home. Not even for one minute.

Oh, what’s that, you say? Summers in are unbeatable? Fine. You can have them, along with a raging case of Seasonal Affective Disorder for the rest of the year…and a complete line of all-season fleece-wear. Touché! (To be fair, it was the year of El Niňo when I lived there, which resulted in unusually rainy weather.)

So off we went down Highway 1 with my furniture in the back of a rental van. Along the way, Verd and I caught up on life post-college, taking breaks to visit the redwoods and marvel at the glimmering Pacific. I could feel my spirits lifting with every crash of my dresser against the center console. Who could afford bungie cords? We were 23...

After a long and winding road (both literally and figuratively) we made it to SF. Verd flew back to Boston, and I moved onto my friend Becca’s couch. Upon her recommendation, I took the open room at her pal Heather’s place and officially began my life as a resident. Just a few weeks later, my high school friend, Dougie, came to visit, and insisted that I meet his buddy from college who had also just moved to the city. Enter Matt Graves.

Hailing from the great state of , Matt shared my East coast sensibilities. (I have no idea what that even means, but I promise there’s a nugget of truth in there somewhere.) He and I were pretty much inseparable during those years, exploring our and working our way through the trials of dot com madness and the 20-something dating scene. One of my favourite stories from that time entails Matt asking a girl he fancied to meet him at this bar--a bar he thought looked like a lot of fun. Little did he realize, it was a hardcore dyke bar. Then when he showed up 30 minutes late, he found his budding relationship moving very quickly from "getting-to-know-you" to "we’re-so-over." Ha!

I was incredibly lucky to meet all sorts of fun friends over those introductory years…another one of them being Ms. Marisa. Courtesy of Craigslist, I met her through a temporary living situation, yet, thankfully, her starring role wound up being not-so-temporary. It was Marisa who decided that a 10-year anniversary warranted an “Adult Dinner Party” since, after all, we were adults now. So threw one she did. And the theme was, of course, , which meant a menu featuring Ciappino with sourdough bread and Irish Coffees with desert!

Seated at our table were some of my oldest friends in the city (along with some new yet golden ones): a former roommie, my boss from my first job, and, of course, Mr. Graves. We spent the evening telling stories from the early years which was fun, and by fun I mean mortifying. (Remember when Lauren killed her roommate’s hamster*? What about that time when Mickey needed back-up behind the Powerhouse bar during the Folsom St. Fair and somehow convinced her to serve the stark naked/endlessly amused clientele? Oh! And remember that really weird guy she dated who….” ). Ugh.

All in all, the night was a huge success and Marisa’s homemade fare impressed everyone—including her. As for the “adult” aspect of the Adult Dinner Party party, well, I’m not so sure we delivered. Perhaps in another 10 years we’ll nail that part.

*Wait! It’s not as bad as you might think. What happened was that I had come home one night and put little Puff in his hamster ball. Exhausted from my duties as an up and coming PR professional, I accidentally fell asleep while he was in there and woke up in the morning to find an empty ball (gasp!). Little did I know, my roommate had stashed deposits of rat poison around our flat after spotting a mouse in the kitchen one day. The rest is history. May our dear Puff rest in peace.

Watch a video of Marisa preparing the Red Snapper for the Ciappiono.