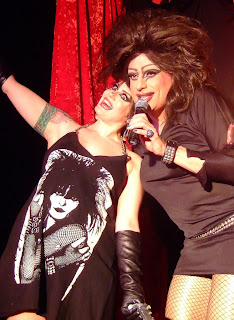 Never before had I considered that the very same draft that necessitates me hanging out year-round in wool sweaters and fake Uggs could be repositioned as a luxurious, fresh and serene feature for sleepover guests. Suddenly, my apartment seemed a little less ghetto.
Posted by LJP at 3/30/2008

You forgot to mention your own personal experiences with Utah Coal Mine. For the record, Lauren is not a big fan of it, and I would wager it would be a tough call for her to decide which she hates most, UCM or a great white. I have a sneaking suspicion these two scenarios are equally horrible in her eyes and keep her up at nights. Now I am one to always push the envelope when it comes to testing people's fears, so I have a novel idea. Have a great white shark Utah Coal Mine Lauren! If a shark is not readily available, have someone wearing a great white shark costume perform the act.

BTW, I am amazed you omitted my offending gaseous powers from your recant. I must have temporarily paralyzed you from remembering that moment.