5 Days on the Playa 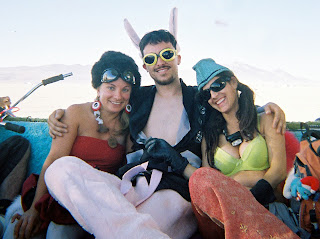 I've been back from Burning Man for exactly one week now (arriving home day later than planned), and I'm just finally starting to crawl out from under the layer of playa dust that's covering my life. Everyone wants to know how I liked it yet I can't seem to think of a response that fully captures my feelings. So instead, I'll share a small window into my experience there:

I wake up with the sun and open my eyes. I'm in my tent snuggled in my sleeping bag. Strewn around me are an empty water bottle, a headlamp, a jar of coco butter, a Ziploc bag full of sparkling ribbons, and a pile of colorful clothes from the night before. Everything is covered in a thick layer of playa dust, including my head.

In the corner of my tent, I spot what looks like a small turquoise animal and think to myself, "oh good, my wig made it home with me last night." The collection of items sparks memories from that party I was at the night before, the one where the dj booth controlled a fire machine that would ignite on beat, sending the crowd into high gear.

Exhausted, I get up and walk about 20 steps into our common camp area, careful not to trip on someone else's tent stakes. Two of my camp mates lie lifelessly on cots under our weary shade structure. One is wearing a plaid school-girl skirt with combat boots and a flowered bikini top and the other is in a shiny silver gown. Their hair is gray with playa dust. They just got home.

I walk to the porta potties and return to camp, lying down next to my friends on an assortment of animal-print pillows. A few hours later, I awake to someone calling my name. It's my friend Marisa from SF who's camped across the playa with her sisters in a 5-story "apartment building" with an incredible view of Black Rock City. I pack my gear for the day (no small task) and we head off together on our bikes.

We ride past a line of people dressed as superheros, princesses, cavemen, pimps, sea creatures and fairy tale characters. They're in line to get ice for their coolers. We pedal on past a Snoopy snow cone stand, a naked dominos tournament, and a row of trampolines. I stop to do a flip. A group of girls painted green from head to toe cheer for me...in French.

Soon after we arrive at Marisa's camp, a dust storm hits. While we pass the time, I French braid the hair of two women in their 70s. They each ask for extra ribbon. Our furniture starts to blow over and people from outside run in for cover. We serve them iced tea and zucchini bread. They tell us funny stories about their lives in Canada. We're all wearing dust masks and goggles.

The storm passes and we head back out on our bikes. We come across a phone booth in the middle of nowhere that reads "Talk to God." Each of us chats on the phone for a little while. God is on the other end! Marisa asks a personal question and He advises her. I do the same. We meet some teenage boys who are also at the phone booth. They give us strawberries and we cover them in sunscreen. A huge double rainbow appears.

We're off again. I notice the sun beginning to set so I head back to camp. It's my night to cook and I find the kitchen somewhat destroyed from the storm. My cooking partner and I do our best to clean up shop and fix dinner for the group. One by one, everyone trickles in and begins to change into their night costumes. We trade ridiculous stories as we devour Indian food and chai tea. It feels good to relax for a while.

A few hours later we're ready to take on the playa again. Our night gear is located, sorted and packed and we've attempted to hydrate. We hop on our bikes, which are wrapped in matching blue Christmas lights. This makes it easy to stay together when we're riding in the dark. Someone leads the way and...we're off!

We ride past the ice hockey dome, the fencing quarters, and those trampolines again. Our way is lit by the glow of people all around us. Bright headlamps, colorful E.L. wire, blue glow sticks and strobe lights light our path. We weave through the city, high-fiving people walking down the street. A sultry young woman rides along next to us. She's being pulled in a wagon made to look like a bird's nest. She serenades us with Eye of the Tiger. She's an incredible singer.

The lights are getting brighter--we're approaching the Esplanade of the playa. Passing through the entrance feels like launching into space, sort of like riding Space Mountain at Disney World.

We break into the expanse. There is action all around us. A group of people dressed as jail birds run past us, flapping their wings. A bike with a serious sound system follows behind them. It's blasting hip hop. Suddenly, a huge turtle cruises by. It's an art car transporting people from the snuggle dome to the iron tree house...or maybe from the monkeys to Thunder Dome where people beat the shit out of each other while suspended from swinging harnesses. We wave to the turtle riders and pedal on.

After hours of dancing, we lose each other at a crowded outdoor dance club. I still see a few people I know. I'm glad I changed out of my wonder woman boots, which are a little tight. Did I lose my head lamp? That girl looks so familiar. Oh, it's here in the pocket of my moon jacket. Do I have enough water? That guy's costume is hilarious.

A friend from my camp and I wind up together. He leads me to our blue-lit bikes where we've stored our water. We can't stop laughing. Is that the sun coming up already? All of a sudden I spot an art car that we heard about the night before...from a guy dressed as a smurf who we met at the roller disco. His smurf camp has its own car consisting of a snail pulling a mushroom. Inside the mushroom is a dj booth.

We run into another camp mate, convince her to join us, and we all jump on the car (pic above). And there's our friend from the roller disco! What fun! He introduces us to the other smurfs as the car starts moving. We stop a few times to dance on the playa. Could it be noon already? These people sure know how to smurf it up. Where are we? My friend assures me we're not too far from our camp. An adorable girl in a pink gown offers us champagne.

It's getting really hot and we're still in our night clothes. We need water. We force ourselves off the art car and trudge back to camp. Where are our bikes? When was the last time we ate? Does anyone have some chapstick? Yes, I have a band aid for you.

Back at camp we collapse under the shade structure. Our camp mates bring us leftover chai tea.
Posted by LJP at 9/10/2007

1. The picture of Marissa talking to God is brilliant, it must be on
her profile

3. I can't believe you included a link to purchase your sleeping bag

4. Funny, I just dreamt about space mountain at disneyland