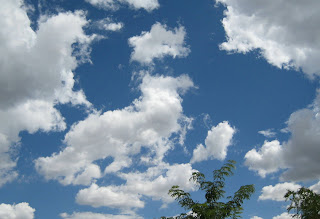 I really love San Francisco. I do. I even wrote about some reasons for this once. In fact, there are new reasons all the time....like the Alamany Farmer's Market (my friend/neighbor brought me there recently and it couldn't have been more thrilling) and the fact that I got to impress one of my recent visitors with a somewhat badass earthquake. As much as I love this city, there's one thing that never fails to trigger day dreams of moving far, far away. And that thing would be the cold summer weather.

Before you launch into a lengthy retaliation noting how SF has the mildest winters ever which really make up for the summers...and how I can just spend some time in the East Bay where it's "at least 10 degrees warmer"....and how the fog is actually quite beautiful....and how there are some October days to die for (true) which also sort of make up for the summer (false), please just consider for a minute that some people really like it when it's sunny and hot outside for weeks on end.
I know this may be hard to believe for all you people who find temperatures above 70 degrees to be unbearable, you same people who crave those "cozy" summer days when the fog rolls in and "blankets the city." For some of us, that fog is the ENEMY as it turns they sky gray and blocks out the warm sun, which causes us to freeeeeeeeze as we brave the walk home from BART, as if it were February in NYC. There, I said it. I live in SF, and I don't like the fog. And, yes, I realize that's like living in Spain and not liking tortillas...or in NJ and not liking, um, gardens.

With eight summers behind me here in the city, I've figured out successful coping strategy: go on fun trips to warm places. To further my plan, this past weekend I visited my friend Will in Santa Fe who's house-sitting for his parents while they're in Australia. Very noble, no? He gets to live in this beautiful home where he writes screen plays, works on Web design projects, and goes for long runs amidst a sea of adobes. And when he's done with his work for the day, he gets to drink margaritas and hang out on in a short sleeved shirt on the "ramada." Oh, and did I mention that it's sunny and warm there...and that the sky is bright blue? Examples one and two: see above and below. 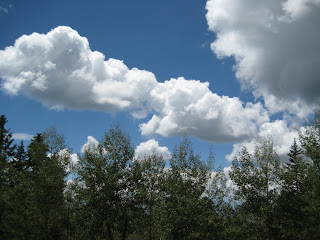 A few words on Will. First of all, he's an exceptional host. In fact, if you're ever looking for tips on entertaining a visitor, you should probably just email him at Lauren'sfavoritehostatsixsquaredotcom. Besides cooking incredible meals and letting you sleep in without giving you a guilt trip, he never makes you go to sporting events, and he has fun doing exactly what you want (eating green chile and buying sparkly window decorations at a crafts fair) and last but not least, he always sends you back home with a CD that he put together especially for you...and it becomes your favorite for quite a while...until he makes you a new one.
Second, he knows more about movies than anyone...possibly ever. And he can guess exactly what films will appeal to each of his friends. Upon his recommendation, on Saturday night we watched Grey Gardens, a documentary about Jackie Kennedy's aunt and first cousin who "descend into a strange life of dependence and eccentricity" at their decaying house in the Hampton's. What could be better? Needless to say, I'll be watching that one again.

There are lots of other things to say about Will, but I don't' want to embarrass him. Instead, I'll just post some more pictures of the blue sky in Santa Fe: 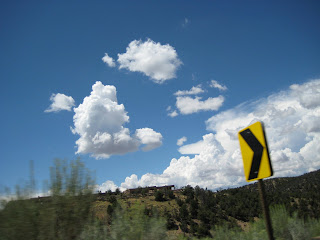 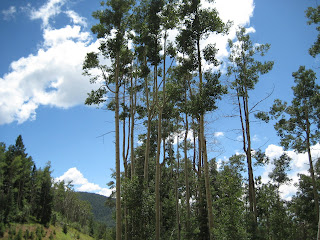