Shake It Up, Shake It In 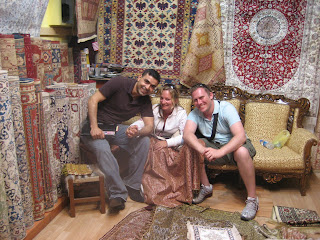 On our final day in Istanbul, Mickers and I hit the Grand Bazaar which was teaming with tourists and Turks alike. Just as the guide book promised, it was HUGE and VERY busy. And you could buy just about anything there. Leather, lanterns, baklava, spices, carpets (see above photo), jewelery, more baklava, hand bags, books, kebabs, you name it—it was there. After a long day of shopping and eating, Mickers and I had our last baklava snack, cleaned up after our day in the trenches and headed out for our final night on the town.

Upon the recommendation a NYT article that my aunt had sent me, we decided to check out a restaurant called 360. Known for its 360 degree views of the city, it would be the perfect spot for us to gaze down upon all the neighborhoods that we had explored. The place turned out to be quite the scene with a beautiful, young performer walking around in a head-turning dress and white fur coat, singing a saucy jazz number. The host, who seemed to be a player on the Istanbul party circuit complete with pink tinted glasses and a detailed account of the late night scene, recommended that we head out to a place called Club 3 later that evening. Why not? We had to stay up all night anyway since our flights home left at 6 am the next morning.

Club 3 turned out to be quite interesting, with a boxing ring in the center of the dance floor, the purpose of which we never determined. Was it for real boxers? Drunk impromptu boxing? We arrived right before the place started to fill up, but by 2 am all kinds of stylie Turks began pouring through the door. One fabulous boy sporting a tight, sequined Garfield T-shirt insisted on practicing his English with Mickey. Just as we started to ask him about the boxing ring, the entire club stopped dead in its tracks—Turkey’s EUROVISION song had come on and no one was going to miss a WORD.

Background: The Eurovision Song Contest is an annual competition held among member countries of the European Broadcasting Union (EBU). Each country submits a song to be performed on live television and then casts votes for the other countries' songs to determine the most popular song in the competition. The contest has been broadcast every year since its inauguration in 1956 and is one of the longest-running television programs in the world. It is also one of the most-watched non-sporting events on the planet, with audience figures as high as 600 million internationally.

To demonstrate our solidarity, Mickey and I shook it to “Shake it Up, Shake it in,” which we, too, were starting to know by heart. Considering we still couldn’t speak any Turkish, I decided this would be our way of showing the Turks how much we loved them. Before we knew it, it was time to head to the airport…and the boxing hadn’t even started!

Recommendation: Play Turkey’s EUROVISION song. The video flashes pics of all the places I've talked about. And now you, too, can get this song stuck in your head.

If you like Eurovision, you'll *love* Lordi, from Finland, who won last year.

Check out http://www.youtube.com/watch?v=PdbDNL5oqCs (I can't embed the video here)