C u in Turkey 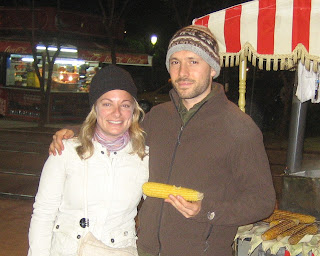 Twelve hours later I landed in Istanbul where I was to find Rob at our designated airport meeting location. Having grown accustomed to the use of cell phones to finesse most meet ups, I was ashamed to find myself a little panicky about locating him, knowing he had left his phone at home. I realized how I now expected confirmation text messages every step of the way when meeting up with a friend. Successive messaging indicating “Leaving now,” “xbf on train--ignored him,” “B there in 5” were in inextricable part of the process. Somehow, a text from Rob indicating “Just landed!” seemed wholly necessary and way more effective than the simple act of checking the arrivals board for his flight number and noting when the space next to it blinked with the words “flight has landed.”

While trying to determine when exactly I had developed this technology-reliant anxiety, I thought about the way my friend Brad and I met up back in ’97 before traveling through Europe for the summer. The master plan consisted of “Go to the Sagrada Familia church in Barcelona every day for three days at 9 in the morning and 9 at night until we find one another. OK?” If this failed, the foolproof backup plan was to buy Spanish phone cards and call my mom in NJ to relay some sort of instructional message, banking on the fact that she’d be home at the very minute we each placed our call. I was 20 years old at the time, had never traveled on my own and I remember thinking this plan was genius…and it pretty much was.

Despite the lack of incessant cell phone communication, Rob and I met up exactly as planned. After making our first withdrawals of colorful New Turkish Lira, we set out for our hostel. Note: Turkish money does not fit in American wallets. We exited the airport….and what was this? It was COLD outside?! My visions of lingering evenings spent at outdoor cafes in sundresses and sandals came to a screeching halt. Maybe I’d have to wear a head scarf after all…just to keep warm. I texted Mickers, who was to arrive four days later, and told him to bring a sweater for sure. He wrote me right back, “Will pack orange cashmere!”
(see above photo for nighttime outfit reality)
Posted by LJP at 5/22/2007