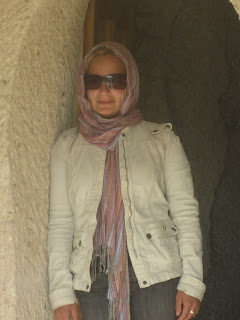 Our final encounter in Cappadocia was our outing to an outdoor bazaar in Nevsehir, a small city that our hostel owner described as a bit more "traditional." Mickey needed to buy a replacement towel, Rob wanted to shoot some pics and I was hoping to find some fabric to bring back home. Immediately upon arriving to the bazaar, it was clear that this was NOT a common stop of the tourist circuit—hardly anyone spoke English and all eyes seemed to follow us as we walked around, despite my best attempt to fit in (an endless source of amusement--see above).

The market was tremendously colorful and completely hectic. Hundreds of vendors were selling everything from pocket knives to cloves of garlic still attached to the root. They yelled out to potential customers as children chased one another through the crowded walkways and shoppers chatting enthusiastically as they strolled arm and arm through the seemingly endless vegetable section. Despite all the action, we couldn’t seem to blend in. Visual: Britney, Justin and K-Fed hunted by the Turkish paparazzi.

Since Mickey and I would be taking an overnight bus to Antalya that left a couple hours later, I thought it would be a good idea to buy some fruit for our journey. I spotted an orange stand and asked the vendor for two oranges by means of holding up two fingers and smiling. He nodded and handed me a humongous bagful. I attempted to explain that I only wanted two oranges, which prompted him to point to a Turkish sign that included precisely one word I could recognize: “kilo.” Apparently, you can only purchase fruit and veggies by the kilo at this market. Not wanting to attract any more attention, I managed a defeated “Tea, sugar and a dream,” and walked away, lugging the 2 kilo bag.

Thinking about how sticky all those oranges would be on the bus ride, I bought what I thought to be a pack of baby wipes, perfect for cleaning up while on the go. Upon further investigation, the purchase turned out to be a baby diaper, which I hoped was not an omen for the 10 hour trip ahead. As we headed out of town, Rob asked if I thought we’d be on the local evening news, like on E! celebrity sightings. I imagined the headline, “Three suspected Americans attended the bazaar today, purchasing one towel, 2 kilos of oranges and a baby diaper. Their intentions were unclear.”